[BOOK REVIEW] A Lot Like Love by Julie James 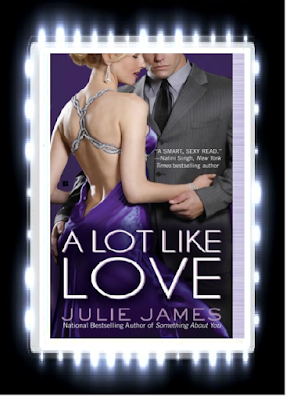 To be honest, I was actually surprised that Julie James would make a sequel to her first book “Something about you” (a book I read years ago) and ever since I read that book and “Practice Makes Perfect,” I just had to try out more books by her!  “A Lot like Love” is the perfect romance novel to read for anyone who is a fan of romance novels that has a bit of crime and mystery thrown in!

The book starts off with the FBI trying to arrest Xander Eckhart, who has secret dealings with mob leader Roberto Martino, but the only way to do that is to find someone who has close connections with him.  Enter Jordan Rhodes, daughter of billionaire, Grey Rhodes and who also happens to be the owner of Chicago’s top wine store!  To get Jordan Rhodes to participate in the capture of Xander Eckhart, the FBI promised that they will release her brother, Kyle Rhodes, who had been put in prison for shutting down Twitter.  Jordan agrees to this and decides to sneak into Xander’s exclusive party, but she must be accompanied by a date that the FBI assigned her and that date happened to be Nick McCall!  Nick McCall is the FBI’s number one undercover agent and in order to fool Xander, Nick and Jordan would have to act like an actual couple.  However, both Jordan and Nick will soon discover that the undercover work will become more complicated as they start to develop feelings for each other!

Wow! What can I say?  This book was just so fantastic that I found myself fanning myself at every turn!  Julie James has done a brilliant job at not only providing us with hot and sizzling romance, but also enough crime drama that really carried the story!  I loved the fact that since Julie James had attended law school, the experiences that the characters go through when dealing with the FBI business and the judicial system sounded so authentic that it makes me want to deal with the law system myself!  What I loved so much about this book were the characters themselves as they were funny, sarcastic, sweet and awesome at the same time and I really felt so much excitement for these characters!  I also loved the way that Julie James brought back Jack Pallas and Cameron Lynde from the first book “Something About You” as we can see how they are doing in their relationship in this book and they provided a great supporting cast for the main characters.  Now onto the best characters in this entire book and that are Jordan Rhodes and Nick McCall themselves!  I just loved the fact that Jordan Rhodes is such a strong female character as she is sarcastic and smart at the same time!  I loved how independent Jordan really is as she never tried to rely on her father’s money to get her through her life; instead she owns her own wine business and she is shown being so knowledgeable about the wine that she sells.  I also loved the way that Jordan is quick to stand up for herself, especially against anyone who gets in the way of what she wants.  Now, let us talk about the hero of this story and that is Nick McCall!  I just loved Nick McCall as he is just as sarcastic as Jordan is and they really complement each other perfectly!  I also love how sexy Nick McCall is, whether he is in his fancy work suit or he takes off his shirt to show off his muscles!

For anyone who does not like sex or strong language in a novel, this novel has plenty of strong language, including the use of the “f” word and the “s” word.  Also, the sex scenes in this novel are explicit, so it would be best to skim over these scenes if they are uncomfortable to read through.

Overall, “A Lot Like Love” is a fantastic read for anyone who is a fan of Julie James’ works and loves reading crime and mystery novels with a dash of hot romance thrown in!  Now, I am off to read Kyle’s side of the story next!