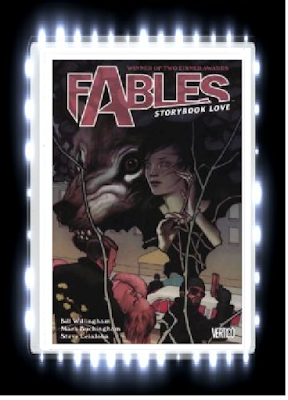 After reading the first two volumes in Bill Willingham’s well-praised graphic novel series “Fables,” I just had to check out the third volume “Fables: Storybook Love” and at this moment, this volume has restored my faith in the “Fables” series!  That is not to say that the first two volumes were not great, but when I read the first two volumes, there was not enough development going on for the characters and I felt that I was reading filler stories rather than a good introduction to this series.  For anyone who wants to read a good volume of the “Fables” series, this is the volume to definitely pick up!

In this volume, there are several stories that really make up the future set up for the Fables characters including “Bag O’Bones,” which tells the story of Jack trying to trick Death, “A Sharp Operation” where Bigby Wolf has to stop a news reporter from exposing the secrets of Fabletown, “Storybook Love,” the main story where Bigby Wolf and Snow White realize that someone from Fabletown is threatening to kill them and “Barley Corn Brides” where it tells the story of how the Lilliputian Forces tried to find barely corn to produce more women in their village.

Bill Willingham’s writing!:  Just like the first two volumes, I really enjoyed the way that Bill Willingham tied in all of the fairy tale and folklore characters into a more modern day setting as they were run out of their homeland by the Adversary and are forced to live in the human world.  I believe that Bill Willingham’s style of storytelling has definitely improved in this volume as the characters are much more fleshed out in this volume than they were in the previous volumes.  I really enjoyed seeing more of the relationship between Snow White and Bigby Wolf as they seem to slightly complement each other, with Snow White being proper and authoritative and Bigby Wolf being more gruff and sly.  Bill Willingham has also done a brilliant job at mixing in some snappy dialogue to the characters within a dramatic storyline, such as hearing funny lines from Little Boy Blue while he and Jack and Bigby are trying to sneak into the news reporter’s apartment to erase his photos of Fabletown.  I also loved the little side stories like “Bag O’Bones” and “Barley Corn Brides” as they not only go into depth about the characters such as Jack and the Lilliputian people, but they also slightly bring up points about how the Adversary affected their lives (which was something I have been complaining about how the first two volumes rarely went into detail about the Adversary).

The artwork:  This was the actual first volume I have seen from the “Fables” series that uses several different artists to tell each story and I think that it greatly fits with the mood of each story.  Probably my most favorite artwork in this graphic novel was the artwork done in the story “A Sharp Operation” which was done by Lan Medina.  I loved the way that Lan Medina gave details to the characters facial expressions as they reflect anger and sadness and I also loved the way that Lan Medina made all of the characters extremely realistic, which really brings out the dramatic nature of the story.  I also enjoyed the artwork in “Storybook Love” done by Mark Buckingham, although my only quip with the artwork is the way that the characters’ faces lack vivid detail like Lan Medina’s artwork.  The artwork done by Linda Medley in the story “Barley Corn Brides” was the one that truly stood out from the rest of the artwork as the characters look like cartoon characters and the colorings were much brighter in this story.  Bryan Talbot’s artwork in “Bag O’Bones” was truly realistic and dramatic as the battle scenes are done in vivid detail.

Anyone who does not like strong language and gory violence in a graphic novel might be a bit put off by this graphic novel.  The language is extremely strong as it uses words like the “f” word and the “s” word and that might be offensive for anyone who does not like strong language.  Also, there are many gory scenes in this graphic novel, especially in the story “Bag O’Bones” and “Storybook Love” and since they are extremely graphic, this would be too unsettling to read through.

Overall, “Fables: Storybook Love” is definitely much more improved from the previous volumes as the characters are better developed and we actually get to see something really happening with the storyline.  Now, I am definitely looking forward to the rest of the “Fables” series!