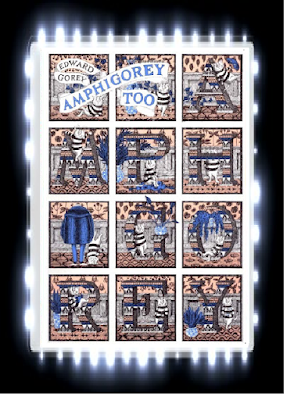 In this volume, there are a total of twenty stories collected by Edward Gorey, which includes:

Just like the first volume, Edward Gorey has done a brilliant job with both writing and illustrating this book!  Edward Gorey’s writing has a sophisticated tone as the stories seem to take place in Old Victorian times and the writing greatly complements the creepy atmosphere of the stories such as using words like “atrocious,” “beastly,” and “abandoned” to really bring out the creepy situations of the stories.  Edward Gorey’s illustrations are just as effective as they were in the first volume as the coloring is in black and white.  Even though the characters look a bit simplistic, the images of the characters performing horrible deeds such as an image of a baby ripping off a cat’s head, is brilliantly done as the images are not too gory.  Some of my favorite stories in this volume were “The Beastly Baby,” “The Chinese Obelisks,” “Story for Sara,” and “The Disrespectful Summons.”

THIS BOOK IS NOT FOR CHILDREN!

There is a lot of disturbing content in this volume that would scare small children such as images of characters ripping animals’ heads off and children being tortured and eaten by various threats.  Also, the writing might be too difficult for smaller children to really understand since it is written in a more sophisticated manner that contains many large words like “monotonous,” “innumerable” and “interred.”  The reason why I took off half a point from this book was because some of the stories like “The Iron Tonic,” and “The Salt Herring” were a bit boring to read through and sort of slowed down the stories for me.