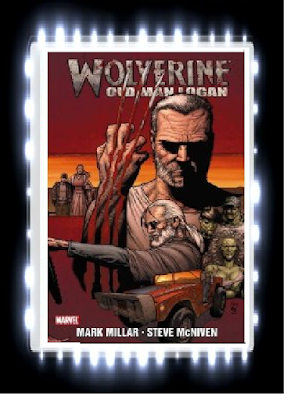 In the future world, the United States is being ruled by the villains of the Marvel Universe (Dr. Doom, Norman Osborn and the Kingpin) and all of the superheroes were killed off, except for two heroes: Wolverine and Hawkeye!  Wolverine is now living peacefully with his family as he swore off ever using his claws ever again since a horrible incident happened that dealt with him using his claws.  One day however, the evil Hulk Gang wanted their payment in rent from Wolverine and if they do not get their rent money, they will kill Wolverine’s family.  So, Wolverine goes on a cross country journey with his partner, a now blind Hawkeye, to get some money for Wolverine to pay the rent.  Unfortunately, even though Wolverine is trying to live a peaceful life, he will soon realize that in a world ruled by villains, he will always be a target and he might have to compromise his stance on not fighting anymore once his life and family are being threatened!

Mark Millar’s writing: After reading Mark Millar’s fantastic run on “Ultimate X-Men,” I just knew that I had to give this book a try and when I did, oh my goodness, I was totally blown away by this story!  Mark Millar had done a fantastic job at giving us a really dark and dystopian world where super-villains ruled the United States and Logan decides to give up being “Wolverine” after a tragic event happened in his past.  I loved the way that Mark Millar developed Wolverine’s character and the fact that there would be a day where I would see Wolverine become a pacifist was really surprising to me.  I also enjoyed the back story about why Wolverine became a pacifist and what happened to him in the past was a truly terrifying and emotional moment in this book that will make you really sympathize with Wolverine’s predicament.  I also loved the idea about this being a “what if” story about what would happened if the super-villains ruled the world and all the super heroes were killed?  It rose up so many interesting scenarios in this comic about what the super villains would do once they take over the world and how the world would look like.  Apparently, the world is full of people being killed for no good reason and the endless changes to the United States such as California now being called “Hulkland.”  I also loved the way that Mark Millar portrayed Hawkeye and Wolverine’s relationship with each other as Hawkeye is always cheerful and can still fight extremely well even when he is blind and I loved the fact that they still remain friends after all the hardships of living in a villain ruled world.

~A huge warning for anyone reading this comic~

This comic has oodles and oodles of blood and gore throughout!  I had never seen a “Wolverine” comic that had so many scenes of people being killed in the most brutal ways (being cut up) and anyone who does not like seeing any kind of strong violence in a comic might want to skip this comic.  Also, there is some language in this comic, although not as strong as something you would see in Scott Snyder’s “American Vampire” or Neil Gaiman’s “Sandman” series, so for anyone who does not like reading language in a book, they might want to skim over these words.  I took off half a star because I felt that the beginning was moving a bit too slow and it was not until the middle of the story where things really started to pick up.  Also, the story might be a bit confusing for anyone who does not read “Avengers” or any other Marvel comics since it manages to combine most of the Marvel characters into one story (I know I got really confused when the Avengers were mentioned since I barely read the “Avengers” comics (big X-Men fan here).

Overall, “Wolverine: Old Man Logan” was a really interesting read for me since I usually do enjoy the usual dystopian future storylines and this one was really creative and unique to read through.  Wolverine fans will definitely enjoy this fantastic one shot story of everyone’s favorite claw wielding mutant!