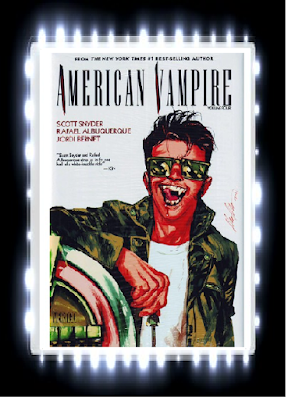 Wow!  I had never seen a comic book series get better and better over time since Neil Gaiman’s “Sandman” series and Joss Whedon’s run on “Astonishing X-Men!”  Scott Snyder continues to amaze me with his stellar storytelling in the “American Vampire” series and the fourth volume is definitely one of the best volumes I had read so far in this series! With brilliant writing from Scott Snyder along with fantastic artwork from Rafael Albuquerque, Jordi Bernet, Roger Cruz and Riccardo Burchielli, “American Vampire: Volume Four” is definitely one volume that will not disappoint you!

In this volume, there are a total of three stories that each details all the characters’ progression into the 1950s:

The Beast in the Cave:  This story is about how Skinner Sweet and Jim Book were once as close as brothers, but when the Indian Wars broke out and a new threat is unleashed, Jim and Skinner’s relationship with each other might never be the same again.

Death Race: Meet Travis Kidd, a nineteen year old teenage boy who not only sports a Greaser look and lives in the 1950s, but he also happens to be one of the best vampire hunters ever around and he has a vengeance with one vampire in particular.

The Nocturnes: Meet Calvin Poole, an African-American man who has a tough life in the 1950s as blacks were frowned upon in society and he is constantly harassed by the citizens because of the color of his skin.  However, what the citizens do not know about Calvin is that he is apart of a secret organization that hunts vampires, while also harboring a dark secret about himself.

Scott Snyder’s writing:   Man, Scott Snyder just continues to amaze me with his stellar writing!  Scott Snyder has cleverly weaved a fictional tale with historical elements that affects the characters’ situations.  I really enjoyed the fact that we are learning more about Skinner Sweet’s past as he was involved in the Indian Wars and his relationship with Jim Book, which we learned about in the previous volumes.  Scott Snyder has done a fantastic job at providing a broad back story about Skinner Sweet and as I start learning more about Skinner Sweet’s back story, I start to understand more about where his vicious nature was coming from and how he affected history in many different ways.  Probably my most favorite story in this entire volume was the one regarding Travis Kidd, as his story was the highlight of this volume (his picture is even on the front of the cover)!  I loved the way that Scott Snyder developed Travis Kidd’s character as he is not shown as a stereotypical “greaser” boy, but hearing his tragic back story regarding his parents really made me feel so much sympathy for his character and I also loved the fact that Travis Kidd is able to take down any vampire he comes across!  I also enjoyed the way that Scott Snyder told Calvin Poole’s story and I felt sympathy for him as he had to suffer through racism in the 1950s and I also loved his dark past storyline as it really made him stand out as a character.  I still enjoy the way that Scott Snyder weaves fictional characters into historical elements like the Indian Wars and the racism and prejudice that dominated society around the 1950s and is still able to focus on the characters trying to fight off vampires without using real life historical figures in the story.

Rafael Albuquerque, Jordi Bernet, Roger Cruz and Riccardo Burchielli’s artwork:  The artwork in this volume was amazing as each artist contributed greatly to the stories in this volume.  Jordi Bernet’s artwork in “The Beast in the Cave” was quite different then from what I usually see from the “American Vampire” series as the artwork is shown in much brighter colors and the characters look a bit generic.  I loved the way that Jordi Bernet gave shadowing to the character’s faces which brought out a dramatic effect to them.  Rafael Albuquerque once again brings true creativity to the “American Vampire” series by doing the artwork in “Death Race” and I loved the dark and gritty feel of the artwork as it greatly complements with the horror story.  Roger Cruz and Riccardo Burchielli’s artwork in “The Nocturnes” were truly well done as Roger Cruz’s artwork makes the characters look truly realistic while Riccardo Burchielli’s artwork is a bit more simplistic, but still has enough dramatic effect to the story.

Overall, “American Vampire: Volume Four” is just full of shocking surprises that really has me geared up for the fifth volume and now that this volume introduces new characters Travis Kidd and Calvin Poole, I cannot wait to see where their stories are going to go in the next volume!