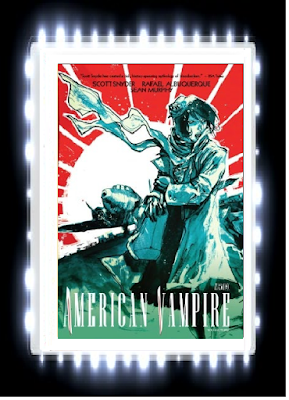 In this volume, there are two stories being told regarding Pearl and Felicia Book.  In the first story, it is the 1940s when there is war between America and Imperial Japan and Pearl’s husband, Henry Preston, is called into battle to fight off a group of vampires that are sighted on an island near Japan.  Unfortunately, Skinner Sweet happens to be in the same group as Henry and he is planning revenge on Henry and only Pearl can rescue her husband from Skinner Sweet!  In the second story, Felicia Book, the daughter of Jim Book, who was killed by Skinner Sweet, goes on a mission with Cash McCogan to Nazi occupied Romania to find Dr. Erik Pavel, who claims that he has a cure for vampirism!

Scott Snyder’s writing:   What can I say?  Scott Snyder’s writing for this series continues to get better and better as the characters are thrown into new and troubling situations!  For one thing, I loved the way that Scott Snyder actually made the story progress in the timeline as the setting goes from the 1920s to the 1940s and it really gives the story a more realistic feel to the characters.  It is rare that I see many comic books actually progress the characters forward in time, so this was a welcoming change for me!  I also loved the way that Scott Snyder tied in the historical aspects of World War II into this story without trying to twist the history of World War II.  Usually, the problems I find with stories that has historical elements mixed in with fantasy elements is that sometimes it tries to state that the fictional characters were actually involved in any kind of historical event that happened in history.  What I like about what was being done with combining the historical aspects of World War II with the fictional characters of “American Vampire” is that they never really mentioned any historical figures like Hitler and the stories were more centered on the characters and their fight against vampirism while using the historical elements to bring the reader into a whole new world on the idea of vampires existing in such times.  I also loved the way that Scott Snyder developed the relationship between Pearl and her husband, Henry, as Henry seems to have second thoughts about their marriage since Pearl is a vampire and is much younger than he is and he wanted to feel wanted again.  I also loved the way that Pearl and Henry still cared about each other, despite the fact that Pearl is a vampire.

As with the previous volumes, there is some strong language and gory violence in this volume including people having their heads ripped off and that might be disturbing for anyone who is not a huge fan of gory violence.  As for the strong language, there are many instances where the characters drop the “f” bomb and say the “s” word, so readers might want to skim over those words if they are uncomfortable with reading them.

Overall, “American Vampire: Volume Three” is a fantastic volume where using historical context in a fantasy series is used extremely well and anyone who is a huge fan of Scott Snyder’s works will easily enjoy this volume of “American Vampire.”