[BOOK REVIEW] The Princess and the Pea by Janet Stevens 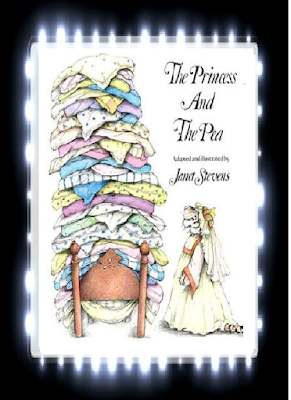 Title:  The Princess and the Pea
Author:  Janet Stevens

I will admit that I wanted to reread some of my childhood books for a long time now and I finally got that chance when I went back and reread one of my most favorite children’s books from my childhood called “The Princess and the Pea” by Janet Stevens!  This is seriously one childhood read that I highly recommend to anyone!

The story starts off with the prince wanting to marry a princess and his mother, the Queen, decided that they should search for a real princess (much like herself) and they ended up traveling around to world to find a princess.  Unfortunately, all the princesses that they came across did not meet the Queen’s expectations and they ended up going back to their kingdom without a princess.  One evening however, a terrible storm came across the kingdom and it was during this time that a wandering visitor came into the kingdom, telling the king and queen that she is a real princess, despite her untidy appearance.  The Queen is of course skeptical about the visitor and she decided to let the visitor stay in the castle for the night.  However, when the Queen set up the visitor’s bed, she put a small pea on the bed and then puts twenty mattresses on top of the pea.  The Queen did all this to see if the visitor is a real princess as she claims that a real princess would have such delicate skin that she could feel a pea underneath all of those mattresses.

Will the (supposed) princess pass this test?

Now, I have to tell you that part of the reason why this version of the classic fairy tale has a special place in my heart is because it was the very first version of the fairy tale I had ever read, therefore being the one to introduce me to the story of “The Princess and the Pea!”  Janet Stevens had done a fantastic job at both writing and illustrating this classic fairy tale as the story and artwork were both beautiful and cute to read through!  I loved the way that Janet Stevens wrote this tale as it was quite an adorable read and I really liked the scenes where the Queen and her son searched across the land to find a real princess for the Prince to marry as the Queen’s expectations were quite hilarious such as a real princess “can play soft music on three instruments at once” or “a real princess can skip across the lawn without bending the grass.”  Janet Stevens’ artwork is truly dazzling to look at as I loved the fact that all the main characters are animal characters, which added to the creative nature of this story.  I really loved the appearances of the royal family themselves as the king and the prince are lions while the queen is a tiger and I never once questioned about how can a tiger and a lion have a lion son together (because in stories like these, those questions do not matter as long as the story is good)!

Overall, “The Princess and the Pea” is a truly fantastic fairy tale that children both young and old will definitely enjoy!  I would recommend this book to children ages four and up since there is nothing inappropriate in this book.