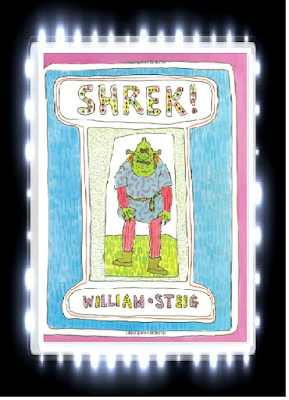 Content Rating:  Ages 6+ (Some Mischievous Behavior and Some Language)

“Shrek!” is another memorable classic book from the great mind of William Steig and it is about how Shrek, a repulsive ogre, tries to find the princess to marry after he leaves his parents’ home.  “Shrek!” is a great book for children who love reading books about monsters.

William Steig has done a great job at both illustrating and writing this modern day fairy tale that is full of attitude.  William Steig’s illustrations are truly beautiful and hilarious especially of the images of Shrek himself as he has a green and warty face, a purple shirt and yellow and green striped pants, which make him, look more hilarious than menacing.  I also love the images of the trees in this book as they look simplistic yet beautiful, giving this book a somewhat simplistic tone.  William Steig makes this story extremely hilarious and full of attitude as Shrek is a character who loves being repulsive and scaring off innocent bystanders, but at the same time, he gives a powerful message to the audience about loving yourself as Shrek loves his own repulsiveness, even if other people do not like his repulsiveness.  William Steig makes this book extremely unique as it was one of the few books to have a repulsive character as the main character of the story.

Parents should know that this book does contain the word jack--- and that might offend many parents who do not want their children learning such a word.  Even though jack--- is used to describe a donkey in this book, the way that the “a” word is being used now might confuse smaller children and might even entice them to say the word so often.  Also, another con of this book is that, in my opinion, it was not as memorable as the movie which is why I gave it a four star rating.  Shrek seem more repulsive in this book than he was in the movie and that aspect of his character sort of made him a less likable character in the book, while in the movie, Shrek was a more benevolent ogre who was upset at the way that people treated him and that made him a very likable character in the movie.  Also, I felt like the character development was not as strong in this book as it was in the movie and the audience might not feel any kind of bond towards the characters in this book.

“Shrek!” is a great book for children about the importance of being yourself no matter what other people think, but the movie might be a better choice about learning this message since the movie developed the characters much better than this book could.  I would recommend this book to children ages six and up due to the use of the word jack---.