[BOOK REVIEW] The Tailypo: A Ghost Story by Joanna Galdone 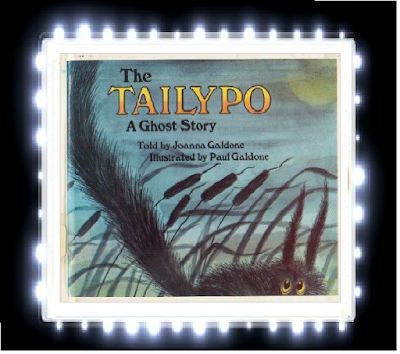 Title:  The Tailypo:  A Ghost Story

I have read many horror children’s books that deal with monsters, witches and ghosts, but I had never read any children’s books or folklore books for that matter that deal with the Tailypo before.  So when I picked up Joanna Galdone’s retelling of the Tailypo story called “The Tailypo: A Ghost Story,” along with artwork by her father Paul Galdone, I was pleasantly surprised by how creepy this story came out!

The story starts off with an old man taking his three dogs (Uno, Ino and Cumptico-Calico) out hunting and they managed to capture a rabbit, which the old man ate for dinner.  Suddenly, the old man spots an odd creature coming in through the cracks between the logs in the wall and he notices that the creature has an extremely long tail.  The old man then took his hatchet and chopped the creature’s tail off as the creature escaped from the house.  The old man then took the tail and ended up eating it for supper and went to bed in a satisfied state. However in the middle of the night, the old man started hearing strange sounds inside the cabin and it was then that he heard a mysterious creature say to him:

All I want is my tailypo.”

The old man then sent his three dogs out to chase the creature away and after that, he went back to bed.  But then he heard the creature say again:

I’m coming get my tailypo!”

Will the creature get its tail back and what will happen to the old man?

Joanna Galdone has done a great job at retelling this ancient ghost story about a creature trying to get its tail back after an old man ended up eating the creature’s tail.  I will admit that this is the very first book that I had read that was written by Joanna Galdone, who is the daughter of Paul Galdone, whose books I am well acquainted to, and for a first book, it is a really solid story that I would not mind reading again.  I loved the way that Joanna Galdone made the story atmospheric and haunting in tone as I was literally on the edge of my seat wondering if the creature will get the old man for eating its tail as I wonder how that horrific situation would be resolved in a children’s book.  Paul Galdone’s artwork is truly beautiful and haunting to look at as the creature is shown as being a black cat like figure that has a long bushy tail and is constantly shown disappearing throughout the pages, not allowing the readers to really see what its true form really is, which brings so much mystery and terror to the story. I also loved the fact that the colors on the artwork are dark and a bit faded as it gives a creepy vibe to the story.

The reason why I gave this book a four star rating was because I felt that the characters were a bit too flat and even though the story itself was pretty interesting, I found myself not really caring about any of the characters except for the creature looking for its tail, since they were not developed enough for me to be interested in how they deal with this scary situation of an unknown creature sneaking into their home.

Overall, “The Tailypo: A Ghost Story” is a great horror story that fans of ghost stories will enjoy and I would recommend this book to children ages five and up since the tailypo creature might scare some children.