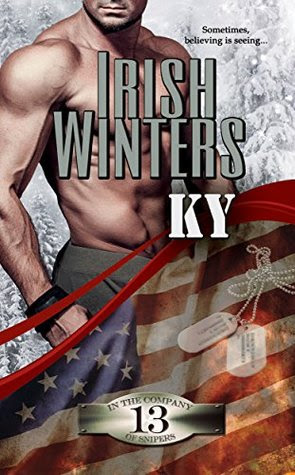 
TEAM Agent Ky Winchester survived a brutal encounter with a Taliban madman only because of a woman with green eyes, an angel he thought he’d dreamed in the depths of torment. She came to him in that far off torture chamber, cloaked in the tender magic of hope, and because of her, he was willing to believe he might survive his nightmare. It’s too bad he never thought to ask her name. Too bad he’ll spend the rest of his days searching for her.


FBI Agent Eden Stark is the Bureau’s number one and very top-secret psychic asset. While running from a different kind of madman, this one intent on mechanizing America’s military, turning them into controllable drones, Eden’s plane goes down in the frigid Canadian north. It’s very probable she won’t survive the night. Two meched-up FBI agents are already tracking her. Maybe wolves.
Maybe someone else.

More about the In the Company of Snipers Series, from the Author:

This series revolves around ex-Marine scout sniper, Alex Stewart, and his covert surveillance company, The TEAM, home-based out of Alexandria, Virginia. An obsessive patriot and workaholic, he created the company to give ex-military snipers like him a chance at returning to civilian life, a chance at normal, with a decent job.

This is not a serial with each book ending at a cliffhanger. I wouldn’t do that to you. I hate cliffhangers! In the Company of Snipers is a collection of passionate love stories involving strong men and women who are tough enough to take on the world alone. Each is a stand-alone read, complete in itself.

Spoiler alert: Every story contains adult scenes including sexual situations (some explicit), language, and violence. I don’t write sweet romance, so be forewarned.

Book 1, ALEX, reveals how The TEAM came to be, as well as how Alex met Kelsey, how they fell in love and fought all odds to stay together. Each of the following books is a complete romance in itself where, in the course of an active TEAM operation, one agent comes face to face with his or her demons. The men and women I write about are all patriots and warriors, dealing with what they’ve lived through or the mistakes they’ve made.

It’s my hope that you’ll come to realize, along with my heroes, that Love Changes Everything…

The cold solved her perspiration problem. She shivered, but didn’t stop struggling with each step.

Still pulling. Still—argh. My arms are killing me. “I. Can. Do. This!”

Her voice sounded shrill and slightly hysterical in the whisper of the quiet pines. So be it. She’d been slightly hysterical before. Certain times required hysteria, maybe dementia. Maybe even outright crazy, the way this day had gone. Surely the day you fell out of the sky demanded a scream at all the crazy gods who let it happen, right?

But screaming would only burn energy she couldn’t afford to waste, and she knew better. Besides, it reminded her of the day her father had left. Make that, deserted. She’d screamed plenty when that happened, her heart torn out of her at Drake Franklin’s ultimate betrayal to his child. What good had screaming, ‘Daddy. Don’t go. Daddy, please. Don’t leave me!’ done?

Nothing. Drake Franklin hadn’t even looked back—just said he’d had enough of all the bullshit and walked out of her life. Left Casey Franklin and her seven-year-old daughter, Eden, without a car or a dollar to their names.

Young Eden became a positive-thinker out of necessity—a glass is half-full kind of a girl. She believed in the inherent goodness of people. It worked until the day an illegal immigrant had broadsided her mother’s rattletrap of a twenty-year-old Honda Prelude in rush-hour traffic in the middle of Podunk Boise, Idaho, and left her dead at the scene. How a guy with no insurance and no driver’s license got released from jail on his own recognizance in time to flee south of the border made no sense to a fifteen-year-old girl without a friend or a relative in
the world.

One of her mother’s girlfriends took her in. Eden legally rejected her father when he didn’t step forward to claim her. She assumed her mother’s maiden name, Stark. Life went on.

But nothing had hurt as bad as standing alone at Casey’s grave telling her mother goodbye for the last time. Unless you factored in Eden’s dumb-butt, seventeen-year-old boyfriend, Stan’s, betrayal with that hooker waitress at Denny’s the day after the funeral. Stan claimed he only hooked up with her because he was lonely. The ass didn’t have a clue what lonely was. The one day that Eden could’ve used a real friend, all she got was another rude awakening. Guys lie. Guys cheat. Guys only think about themselves and that puny, little thing dangling between their legs.

“I sure know how to pick ’em,” she told the bundle sliding quietly along behind her.

Night threatened in black and blue shadows at the edge of the sky she could no longer see. Too many tall, bushy trees obstructed her view. Pines, every last one of them. She used to love the lacy, elegant Noble pines when decorated with snow and glistening icicles the way these were. Pines always reminded her of tinsel and Christmas, one of the few good holidays left in the world. Not anymore. These Nutcracker Suite bad boys just might be the death of her, which could be a good thing in the long run. Freezing to death seemed a better way to go than a double tap to the cranium, her brains spilled out for the wildlife to sample. An Eden buffet. Hmmm.

She blew out a deep breath of frosty air and staggered on. Even gliding over snow-covered ground, her load was a heavy one. Ten feet to go. Then five. Then I can rest and maybe this headache will stop.

At last Eden dropped to her knees, sure she’d done the best she could. This was the only bare patch of earth within dragging distance, sheltered beneath the fanlike branches of a densely
packed stand of evergreens. It almost seemed serene, this spot. Serene and surreal. A little reverent. Sacred even. But mostly— diggable, if that was even a word.

Yes. It would do. A single shaft of the weak winter sunlight fell across her snow-dusted boots. A brave little bird flitted in the chilly branches overhead, but it didn’t sing. Didn’t even chirp. What the heck did birds have to sing about in the frozen north?

She took a moment to catch her breath, but ended the break before her limbs had the chance to seize from exhaustion or her backside from the cold. This next chore would be harder. She still had to bury the body. 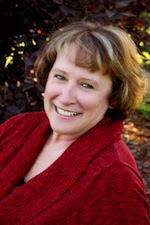 Irish Winters is an award-winning author who dabbles in poetry, grandchildren, and rarely (as in extremely rarely) the kitchen. More prone to be outdoors than in, she grew up the quintessential tomboy on a farm in rural Wisconsin, spent her teenage years in the Pacific Northwest, but calls the Wasatch Mountains of Northern Utah home. For now.
The wife of one handsome husband and the mother of three perfect sons, Irish divides her time between writing at home and travelling the country with her man while - writing. (Seriously, what else?)
She believes in making every day count for something and follows the wise admonition of her mother to, "Look out the window and see something!"


To learn more about Irish and her books, please visit www.IrishWinters.com.