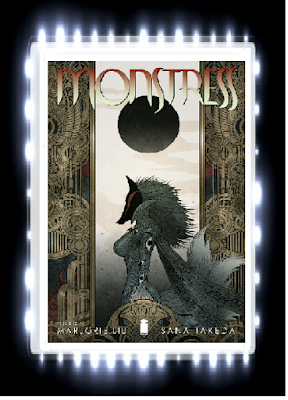 In this issue, Maika had just escaped from the witches’ stronghold and even though she wanted to go there to find out more about herself and her mother, she leaves the stronghold with even more questions on her mind about her mother and about the nature of her powers.  Meanwhile, the Warlord starts making her move and she has her eyes set on capturing Maika for murdering one of the head witches at the stronghold!

Marjorie Liu’s writing: Marjorie Liu’s writing is as beautiful as ever as we actually get to see the repercussions that Maika faces after her stint at the witches’ stronghold.  It was interesting seeing Maika feel so much remorse for her actions in transforming into a monster when she attacked Sophia and the other witches and you also get to see how Maika is still struggling with trying to figure out what kind of person she really is due to the nature of her powers. Even though this issue was not as action packed as the first issue, I still really enjoyed the character interactions between the characters, especially between Maika and the cat and the building tension of the Warlord trying to capture Maika. I also enjoyed seeing the two tailed cat and Kippa the fox human child make an appearance in this issue as I wanted to see more development from them and it was great seeing their reactions to Maika becoming a monster in the last issue, especially with Kippa now being afraid of Maika because of the events of the last issue.  Maika’s interactions with the two tailed cat was pretty entertaining as well as she is often snarky towards the cat and it reminded me of the relationship between Coraline and the cat in Neil Gaiman’s book “Coraline.”

Sana Takeda’s artwork:  Sana Takeda’s artwork is as usual gorgeous to look at, especially of all the exotic clothing worn by each character, especially the Warlord’s clothing being a black dress with jewelry hanging over it that makes her look truly menacing and yet unique in appearance.  I also loved the images of the two tailed cat that looks so adorable and creative, especially with its two small tails.

For anyone who does not like gory violence, there are some scenes of people getting their heads chopped off with blood spraying everywhere and some readers might be a bit unnerved by these images if they do not like seeing gory violence in graphic novels.

Overall, “Monstress Volume One: Awakening Part Two” is another great issue from Marjorie Liu’s intriguing series “Monstress” and I cannot wait to see what happens to Maika and her crew next!