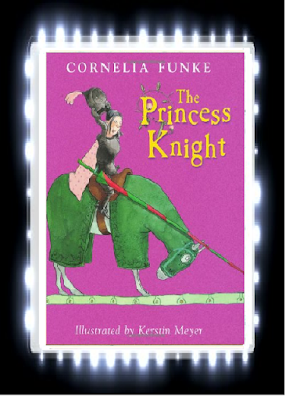 I was reading this book for the Children's Book Picture Book Club for the theme of royalty and I was so into this book!  “The Princess Knight” is a children's book by Cornelia Funke along with illustrations by Kerstin Meyer and it is about a young woman named Violetta who ends up competing with the other knights to become the best knight in her father's kingdom.  “The Princess Knight” is a truly brilliant book that shows women in a strong light that every child will definitely love for many years!

If you think that you have read any fairy tale that has a female knight, then you will definitely enjoy this rare gem that features such a strong and clever female knight!  Originally published in Germany and being Cornelia Funke's first picture book to be published in English, “The Princess Knight” is definitely one phenomenal tale that should be well known to children everywhere!  Cornelia Funke has done an impressive job at writing this book as it is a cute yet inspiring tale about a young woman's determination to become the best knight her father's kingdom.  What I really loved about this book was the main character Violetta as she was truly a clever and strong woman whose determination and independent nature made her a successful character at the end.  I loved the way that Violetta handled the situation about being married to one of the knights if they win since she used her cleverness and strength to get out of the situation.  Personally, I totally understand how Violetta felt about having her father chose who she should marry because I would have been upset myself at the idea of marrying someone that was based on another person's opinion and not my own.  I believe that only you would know who you want to spend the rest of your life with and what to look for in a successful relationship because the other person might choose a spouse that might either hurt you or does not share the same interests as you do.  That is not to say that whoever your friends and family chose for you always comes out bad, but once again, only you have the power to say who you want to be with.

Overall, “The Princess Knight” is a truly amazing book that children who love reading about strong heroines will definitely enjoy for many years!  I would recommend this book to children ages four and up since there is nothing inappropriate in this story.