[BOOK REVIEW] Anansi and the Moss-Covered Rock by Eric A. Kimmel 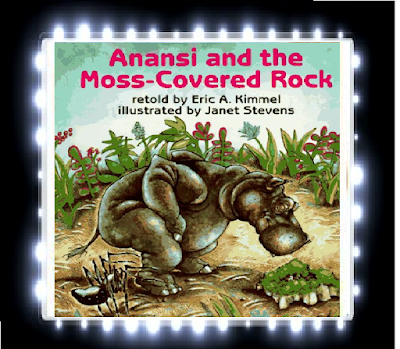 Title:  Anansi and the Moss-Covered Rock

Content Rating:  Ages 5+ (Some Mischievous Behavior and Depictions of Stealing)

“Anansi and the Moss-Covered Rock” is an old African folktale retold by Eric A. Kimmel, along with illustrations by Janet Stevens.  This book is about how Anansi the Spider tries to trick all the animals in the forest by showing them a mysterious rock.  This book is surely a delight to anyone who is interested in African folktales.

The story starts off with Anansi the Spider walking through the forest when he spotted a strange looking moss-covered rock and then he exclaims:

Suddenly, Anansi falls down unconscious and when he wakes up again, he is confused at what had just happened and when he repeated:

He falls back down again and when he wakes up the second time, he realizes the power of the moss-covered rock and he decides to use it to his advantage.  Anansi then goes around tricking the other animals such as Lion and Elephant, by leading them to the moss covered rock and once the animals repeat the magic words:

They fall down unconscious on the ground and Anansi goes back to their houses and steals their food.  Meanwhile, Little Bush deer has been watching Anansi the whole time and she decided to teach Anansi a lesson when Anansi tries to trick her into going to see the moss-covered rock.

Read the rest of this book to find out!

Eric A. Kimmel’s retelling of this ancient folktale is hilarious and charming as Anansi uses a magical rock to get what he wants or at least that what he thinks.  I thought that the idea of using an unlikely substance such as the moss-covered rock to take advantage of people by knocking them unconscious was ingenious since we usually hear about how people would simply use magic spells to control people.  Janet Stevens’ illustrations are done beautifully as she illustrates each animal with realistic features that they make the animals seem to come alive in this book.  The illustrations are also extremely colorful especially of the images of the forest itself as the plants are mainly in colors of pink, green, brown, and all manner of other colors and they make this book extremely bright to look at.  Probably, the image that stood out the most was the image of Anansi himself as he has small beady eyes and long legs.

“Anansi and the Moss-Covered Rock” is a superb tale about how tricking someone can get you in massive trouble if you are not careful and many children would definitely call this an instant treat to read over and over again.  I would recommend this book to children ages five and up since I do not find anything wrong with this book, unless children might have a hard time pronouncing Anansi’s name.