[BOOK REVIEW] Garfield: Lard of the Jungle by Jim Davis 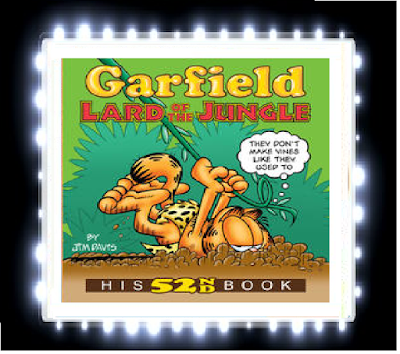 Title:  Garfield: Lard of the Jungle

This volume yet again continues the adventures of Garfield and his life with his owner Jon and canine companion Odie!  This time, we get even more storylines dealing with Liz, Jon’s new girlfriend, Jon visiting his family on the farm and Garfield dealing with his age as his birthday comes up!

Jim Davis’ writing: No matter how many “Garfield” graphic novels I have read over the years, I can never get tired of Jim Davis’ witty and hilarious writing!  Jim Davis has continued to give us a comedic and witty series in his “Garfield” comics, especially whenever Garfield voices his snarky opinions about Jon’s life and Odie’s moronic antics as it makes the audience laugh at Garfield’s hilarious lifestyle. I also loved the addition of Liz as she is shown as not being another failure in Jon’s love life, but as a love interest who is able to put up with Jon’s dorkiness and is the voice of reason in many of the situations.

Jim Davis’ artwork:  Jim Davis’ artwork is still hilarious to look at as all the characters has large and rounded eyes that makes them look extremely goofy and I loved the facial expressions on most of the characters, especially Garfield always looking so bored on each panel despite the zany antics going on during the stories.

Overall, “Garfield: Lard of the Jungle” is a fantastic volume that features everyone’s favorite fat cat and shows that Garfield has still got it after all of these years!