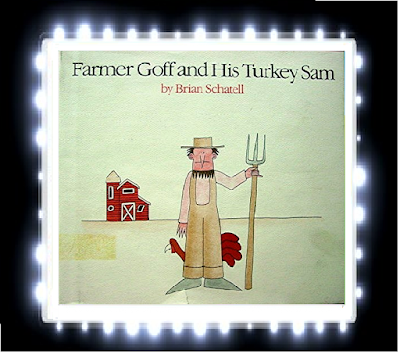 Now, I have a little story to tell here.  When I was in the first grade, my teacher was reading us this book that involved a farmer, a turkey and a pie eating contest and for the longest time, I could not remember the name of this book and therefore, I was not able to read this book for years…. until NOW!  Now, I found out that the title of this book was called “Farmer Goff and his Turkey Sam” by Brian Schatell and man, was it awesome reliving this book again after all of these years!

Farmer Goff was a farmer who lived with his wife and his turkey Sam on a small farm and every year, Farmer Goff would take Sam to the county fair for the annual Turkey contest where Sam would win a blue ribbon every year.  Sam also happens to be extremely fond of Mrs. Goff’s delicious apple and turnip pies, but Farmer Goff is always telling Sam that he has to eat his turkey feed and to not eat any of the pies…or ELSE!  One day, Mrs. Goff baked over 294 pies for the county fair and Farmer Goff took the pies and Sam with him to the fair.  Once Farmer Goff and Sam got into the contest, Farmer Goff started bragging to the other farmers that his turkey Sam will win the contest since he had been training him and feeding him nothing but turkey feed.  At this, Sam got angry at Farmer Goff since he does not like eating turkey feed and he decided to do something about it.

Will Sam the turkey wins the contest and will he finally eat Mrs. Goff’s famous apple and turnip pies?

YAY!  I finally got the chance to read this book again after so many years!  It is a shame that this book is not so well-known among the book community and it is an even bigger shame that this book ended up going out of print, to the point where I had to buy a library copy of this book just to own this book (not that it is bad that it is a library copy, but that just tells me that this book does not have its own printed edition).  Brian Schatell has done an excellent job at both writing and illustrating this book as the tone of the book is extremely humorous and sarcastic and I loved the way that Sam the Turkey gets back at Farmer Goff for all the abuse he has taken from Farmer Goff.  I also like the fact that this book is a bit similar to the antics of Looney Tunes as Farmer Goff and Sam seem to have a bit of a Wile E. Coyote and Road Runner type of relationship with each other as Farmer Goff is Wile E. Coyote and Sam is the Road Runner.  Brian Schatell’s artwork may seem a bit too simplistic, but I think that the artwork works extremely well with the book’s simple yet sarcastic and humorous tone.  The only problem I had with the artwork is that they say that the characters won blue ribbons, but because of the colorings being mainly gray, light brown and red, the *BLUE* ribbons are shown to be *RED* ribbons instead.

Parents might want to know that Farmer Goff acts extremely condescending towards Sam the turkey, especially denying him the right to eat Mrs. Goff’s pies, even though Sam has not done anything wrong prior to the contest.  Parents should let their children know that it is wrong to act rude towards other people and that they should be more kind towards people who have helped them out many times.

Overall, “Farmer Goff and His Turkey Sam” is a truly fantastic and underrated classic that anyone who loves checking out obscure books and books with sarcastic tones will definitely enjoy!  I would recommend this book to children ages five and up due to Farmer Goff having a bad attitude throughout this book.