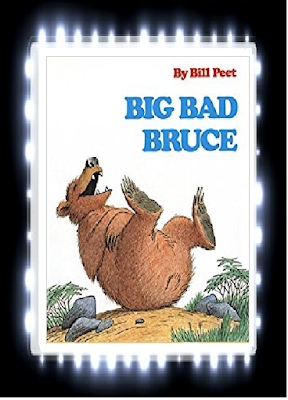 “Big Bad Bruce” is another classic tale by Bill Peet and it is about how Bruce the Bear tortures small creatures and he eventually gets what he deserves when Roxy the witch shrinks him down to the size of a chipmunk.  The lesson of this story may have not been taught right, but this book is still a treat for children to read.

Bill Peet does an excellent job at illustrating and writing the story “Big Bad Bruce.”  First, I like to talk about Bill Peet’s illustrations as they are beautiful and colorful when he illustrates Bruce to seem more like a scruffy and mischievous bear rather than a scary and vicious bear.  The image that I really enjoyed was the image of Bruce standing up on his hind legs looking for some mischief to do as he has a mischievous grin on his face.  Second, I like to talk about Bill Peet’s writing as he effectively uses a fantasy element (witchcraft) to make Bruce see everything from a chipmunk’s point of view and learns about how the other animals felt when he picked on them.  Roxy was probably the most interesting character in this story as she was the only one who was able to stand up to Bruce when he was big and I love how she creatively teaches Bruce a lesson about bullying by shrinking him down to the size of a chipmunk.

“Big Bad Bruce” is an interesting story about the consequences of teasing other people, but parents may want to avert their children about the real lesson being taught her, instead of doing what Bruce has done at the end of the book.  I would recommend this book to children ages six and up due to some advanced vocabulary in this book and the fact that Bruce had not really learned his lesson.