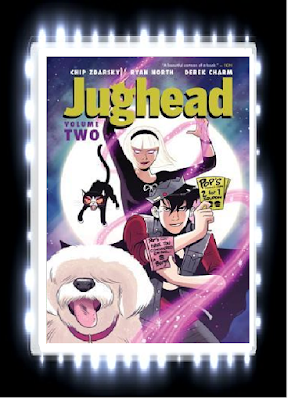 The first half of the volume starts off with both Jughead and Archie going to Camp Lucey to spend some time together, only to find out that a family reunion is going on at the campsite (unfortunately, it is the Mantle family reunion, meaning that Reggie Mantle is going to be there). This causes Jughead and Archie to have a horrible time at camp and it also causes a rift between them as they start arguing with each other about whether or not it was worth it spending time together at their old campsite. Later on, unfortunately, Jughead and Archie get lost in the woods and they would have to put aside their differences if they want to survive the woods!

Meanwhile, in the second story, Jughead meets a girl dressed up as a burger and Jughead refers to her as the “Burger Lady” and ends up falling for her.  Later on, when the “Burger Lady” reveals herself to be none other than…. SABRINA THE TEENAGE WITCH, Sabrina asks Jughead out on a date.  Unfortunately, Jughead does not seem to have any kind of romantic feelings for Sabrina and he has a hard time telling her this, which leads to Sabrina dishing out some unwarranted revenge on Jughead!

Chip Zdarsky’s and Ryan North’s writing:  Wow!  I was amazed by both Chip Zdarsky’s and Ryan North’s writing in this volume!  Both Chip Zdarsky and Ryan North brought so much humor and drama to the stories and it really made both stories so original and creative at the same time!  In the first half of the story, I was surprised at how dramatic Chip Zdarsky’s writing had gotten when it involved Jughead and Archie getting lost in the woods and having an argument during the whole ordeal.  I was actually feeling sorry for Jughead during the whole ordeal since he believed that he was losing Archie’s friendship due to Archie paying more attention to getting a date rather than hanging out with his longtime friend and you can see how deep Archie and Jughead’s friendship with each other really is.  I also liked the way that Chip Zdarsky balanced the humor and drama in this story as while it focuses on Archie and Jughead’s friendship nearly falling apart, there are still some humorous moments spread throughout the story.  Ryan North has done a fantastic job at writing the “Sabrina the Teenage Witch” segment of this volume as it was filled with humor and relationship drama at the same time!  I am so glad that we finally get to see Sabrina the Teenage Witch make her appearance in the “Jughead” reboot because what “Archie” reboot would be complete without “Sabrina the Teenage Witch” causing magical mischief in the “Archie” universe?  I really enjoyed Jughead and Sabrina’s relationship with each other as it was hilarious seeing how the misunderstanding between them unfolded and heartwarming at how they do care about each other’s feelings about the situation.

Overall, “Jughead Volume Two” is a vast improvement over the first volume and fans who love both the “Archie” and “Jughead” reboot series will definitely get a kick out of this volume!