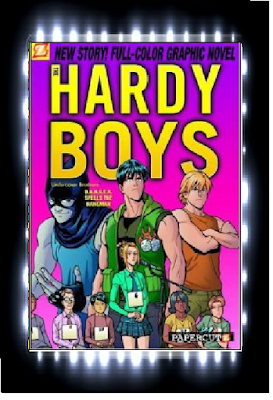 
What is this story about?

The story starts off with Joe Hardy having to go to the National Spelling Bee after Cassie London, the real spelling bee winner, was unexpectedly called to London for a violin performance.  It was then that Joe discovers that there is a murder plot unfolding at the Spelling Bee and he has to do the case solo due to Frank having to take their pet parrot to the vet.  Meanwhile, while Frank is taking their parrot to the vet, he discovers a bunch of burglars trying to steal dogs from the animal shelter to make money off of them and Frank goes out to stop the burglars from kidnapping the dogs.

Can Frank and Joe solve their respective cases?

Scott Lobdell’s writing: Scott Lobdell’s writing is as usual extremely interesting to read as I loved the way that Scott Lobdell wrote each character and the relationships between them, especially the relationship between Frank and Joe as it shows that they truly care for each other when comes to solving cases together.  I really loved the fact that we have a storyline where Frank and Joe are separated from each other and we get to see how both brothers manage their respective cases without the other.  I especially loved the fact that we get to focus more on Joe Hardy’s intelligence as we find out that he has participated in the Spelling Bee before and that he was known to be really good at the Spelling Bee and this story shows much more depth with the Hardy Boys’ intelligence in other areas besides the cases they get involved in.  I also enjoyed Joe’s interactions with Tam, as it seems that they have a bit of a friendly rivalry going on between them and I wished that this volume showcased that rivalry a bit more in the story.

The reason why I gave this volume a four star rating was because, just like the previous volumes, the story seems a bit clunky as the ending was rushed and there was not enough build up leading to the conclusion of the case.  I would have liked this story more if they had developed the clues to the mystery a bit better and actually gave us some kind of closure to the case.  Also, I would have liked to see more moments between Joe and Tam as I felt that their relationship with each other would have made a pretty interesting story and it was a shame that we do not get to see more of their relationship in this volume.

Overall, “The Hardy Boys: D.A.N.G.E.R Spells the Hangman” is a great volume starring the Hardy Boys and once again, I will try to seek out more “Hardy Boys” graphic novels in the near future!