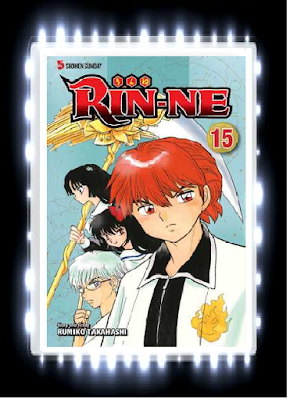 Ever since Renge Shima has been introduced into this series, the series has certainly changed up its game with all the characters involved.  “Rin-Ne Volume Fifteen” is one extraordinary volume that puts a lot of focus on Renge and her relationship with Rinne and the gang that will be enjoyable for “Rin-Ne” fans!

Renge Shima has moved in next door to Rinne (much to Rinne’s chagrin) and has already started causing trouble for everybody again when she decided to give away lucky cell phone charm straps to various people for free.  The problem with this is that it causes Rinne’s spirit hunting business to go downhill as more people get help from Renge instead of Rinne and Rinne must find out a way to put an end to Renge’s trickery before he is out of the business!

Rumiko Takahashi has done it again with her witty and hilarious writing for these unique characters and their crazy situations!  I loved the fact that this volume actually focuses more on Renge Shima and her relationship with the other characters as it made her character stand out more and it was interesting seeing that Renge actually knew most of the characters since childhood and has been a pain in the neck to them for all those years.  I also liked the fact that we get to see what kind of relationship Renge has with Kain (as it seems like they have so much in common, except for the fact that Renge is working for the Damashigami Company) and I would like to see more stories unfold between Kain and Renge and whether or not Kain will discover Renge’s secret.  I was also impressed with the storyline where Ageha and Renge knew each other when they were children and it was interesting seeing them still maintain their rivalry even when they got older as it was pretty comical to watch!  Rumiko Takahashi’s artwork is as always, great to look at as all the characters are drawn in both an adorable and creative way and I also loved the way that the action sequences with the characters fighting each other are all detailed in action.

Overall, “Rin-Ne Volume 15” is a great volume that focuses on Renge Shima that fans of the “Rin-Ne” series will enjoy for a long time!