[BOOK REVIEW] The Lion and the Mouse by Jerry Pinkney 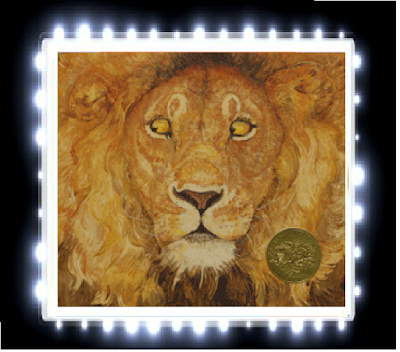 Title:  The Lion and the Mouse

Jerry Pinkney’s illustrations alone retell the story of a popular Aesop fable, since there are no words in this book to tell the readers the story.  Jerry Pinkney’s illustrations are beautiful and realistic looking as the reader can tell that the setting of the book is set in Africa since there are dozens of wild animals around and drawings of high yellowish grass.  The image that stood out the most was the image of the lion itself as it looks extremely realistic and beautiful, especially during the scenes where the lion was holding the small mouse in its paws and has an angry look on its face.

“The Lion and the Mouse” is definitely one of the best wordless picture books since David Wiesner’s “Tuesday” and it will definitely attract children of all ages for its beautiful illustrations and uplifting story.  I would recommend this book to children ages three and up since toddlers would not have problems reading this book since there are no words to tell the story.