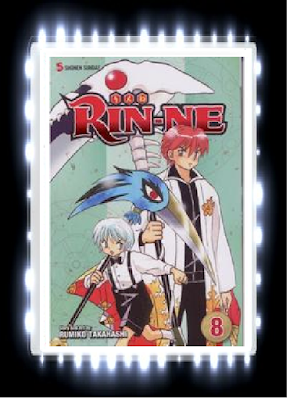 It seems like every time I read Rumiko Takahashi’s “Rin-Ne” series, there is a new character being added in each volume and this volume was definitely no exception!  “Rin-Ne Volume Eight” introduces some new characters that really put a new spin on the world of the Shinigami that “Rin-Ne” fans will be overjoy to read about!

In this volume, Rinne has to be a mentor to a young Shinigami boy named Shoma, who needs at least fifty points to complete his training.  But instead of going after the spirits of dead pets like he was assigned to, he wanted to go after evil spirits that would have earned him fifty points automatically. Shoma then gets himself into trouble when he meets up with the devil Masato and Masato promises to find Shoma some evil spirits (although it is obvious he is up to no good).

Can Rinne help save Shoma from Masato?

Rumiko Takahashi has done it again as this story is written with enough humor and tension that makes this manga so enjoyable to read!  I loved the fact that Rumiko Takahashi goes deeper into the world of the Shinigami as we start to see a young Shinigami child training to take the ghosts to the wheel of reincarnation and it was interesting being introduced to one of the Shinigami children in this volume.  I like the fact that Rinne is interacting with someone else other than Sakura and Tsubasa and while I found Shoma to be a bit annoying at times due to his bratty nature, it was interesting seeing Rinne attempt to mentor a young child in becoming a great Shinigami like himself (even if he is dirt poor)!  Rumiko Takahashi’s artwork is as usual brilliant to look at as the characters are both cute and realistic at the same time and I loved the way that Rumiko Takahashi makes the ghosts look both scary and hilarious as they give the manga a horror comedy feel.

A bit of a fair warning for some manga readers:  this volume contains some intense moments that involves Shoma (a young child) being put into danger of getting hurt in his efforts to fight evil spirits and anyone who does not like seeing children getting put into such danger might be a bit upset with these scenes.

Overall, “Rin-Ne Volume Eight” is a great volume that really helped progressed the characters and the world they live in and anyone who is a huge fan of “Rin-Ne” will greatly enjoy this volume!