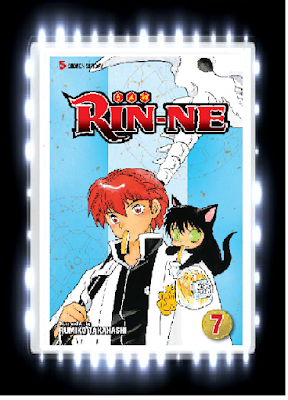 Man, I seriously cannot get enough of Rumiko Takahashi’s “Rin-Ne” series and the series continues to be more interesting to me as I whiz through each volume!  The seventh volume of “Rin-Ne” is more or less a filler volume where the wacky hijinks that Rinne and the gang get involved in has no connection to the main storyline, but it is still enjoyable nonetheless!

Ghostly hijinks ensure for Rinne and the gang as they have to defeat a pair of ghostly cats that possessed some kids, a haunted festival where Rinne tries to figure out why a ghost is harassing his granddaughter and ghosts suddenly appearing at Sakura’s house with Rinne trying to get rid of the ghosts while having to deal with the intrusion of Ageha and Tsubasa.

What’s a young Shinigami going to do?

Even though this volume is another filler issue of the series, I still enjoyed what Rumiko Takahashi has brought to the table.  So far “Rin-Ne” is starting to remind me of “Ranma ½” as in the fact that most of the volumes are filler adventures of the main cast dealing with whatever bizarre incident plagues them.  In this volume, we have Rinne and his friends trying to send ghosts off to the afterlife in peace while trying to prevent them from causing mayhem in the world of the living and this volume reminds me of the “Ghost Whisperer” TV series, except that the adventures are much more comedic and light hearted and I cannot wait to see more stories unfold from the ghostly mayhem that the characters have to endure.  Rumiko Takahashi’s artwork is as usual cute and effective to look at, especially of the ghosts that come from the afterlife as they range from being frightening to being hilarious all in a span of a few seconds!

For anyone who does not like creepy images, there are some scary images of ghosts harassing the living that might be a tad bit frightening for some readers, although the tone of this volume is mostly humorous and light hearted at best, so these images might not have a huge impact on some readers if they focused on the humor of this volume.

Overall, “Rin-Ne Volume Seven” is a truly hilarious and exciting collection of filler arcs that fans of Rumiko Takahashi’s works will enjoy immensely!