[BOOK REVIEW] The Sun Girl and the Moon Boy: A Korean Folktale by Yangsook Choi 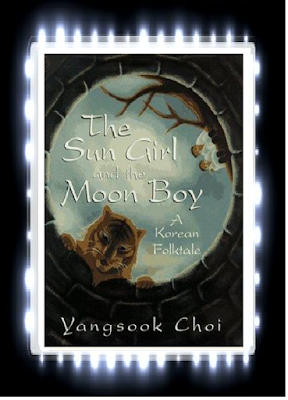 Title:  The Sun Girl and the Moon Boy:  A Korean Folktale

I have been reading many Korean folktales over the years, but “The Sun Girl and the Moon Boy” was definitely one unique tale that I had just recently read!  “The Sun Girl and the Moon Boy” contains elements of “Little Red Riding Hood” and “The Wolf and the Seven Little Kids,” except in this version, it is a tiger who threatens the children of this story!

In this story, when a woman leaves her two children at home to go to the market, she unfortunately encounters a tiger who wants to eat her corn cakes.  But when the Tiger eats all of the woman’s cakes, he ends up eating her and putting on her clothes to fool her children.

After reading other versions of “Little Red Riding Hood” like “Lon Po Po” which is a Chinese version of the classic story, I was interested in reading more different versions of “Little Red Riding Hood.”  Imagine my delight when I finally stumbled upon a Korean version of “Little Red Riding Hood” and this story was just as fantastic as the other “Little Red Riding Hood” versions I had read!  Yangsook Choi did a fantastic job at writing this story as the story was both intense and beautiful at the same time.  I loved the way that Yangsook Choi allowed the story to teach children to be careful of letting strangers into their homes and the consequences that may come with it.  I think that it made the story even more effective to read through and parents can easily warn their children about the dangers of letting strangers into their homes.  I also loved the Korean elements in this story as Yangsook Choi had an excellent author’s note at the end of this book that explains how this story was close to her and I always loved the fact that such stories are close to an author’s heart.  Yangsook Choi’s illustrations were just beautiful as the tiger is drawn so realistically that its presence really brings a threatening atmosphere to the story. I also loved the way that the illustrations have a glow on each character and setting as it makes the illustrations so gorgeous and effective to look at!

Parents should know that a character gets eaten in this story and the story has an intense atmosphere that might frighten young children.  Also, the ending of this story might seem a bit unclear for smaller children since not much was clearly stated about what happened to the characters in the end.  Parents might want to read this book before they show it to their children.

Overall, “The Sun Girl and the Moon Boy” is a truly fantastic folktale for anyone who loves reading folktales from Korea.  I would recommend this book to children ages five and up since the scenes with the Tiger threatening the children might scare smaller children.