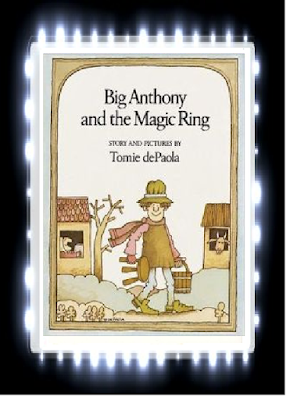 I have been reading the “Strega Nona” series ever since I was a child and I have enjoyed the series ever since! Now, I have read the sequel to “Strega Nona,” “Big Anthony and the Magic Ring” by Tomie dePaola and it is just as hilarious as the first book! In this tale, Big Anthony gets into big trouble when he messes with Strega Nona's magic ring in order to have a little night life! “Big Anthony and the Magic Ring” is an instant treat for children young and old!

Oh my goodness! I never would have thought that the sequel to “Strega Nona” would be so hilarious! Tomie dePaola has done an excellent job at both writing and illustrating this book and I thought that Tomie dePaola's writing is beyond hilarious! I always loved the way that Big Anthony always seem so forgetful whenever he is doing work for Strega Nona, but whenever he comes to discovering one of Strega Nona's magical objects that might benefit him and he has to recite a chant to activate the magical object, he can really memorize those verses! I also loved the way that all the women in the village square started chasing after Big Anthony once he became “handsome” since it was so hilarious at seeing Big Anthony being chased by all the women of the village! I loved the way that Tomie dePaola incorporated various Italian words and phrases into this story such as “caro” and “un momento” into this story as it truly gave this story an Italian flare and it really helped me understand about the Italian language. Tomie dePaola's illustrations are extremely hilarious and my favorite illustrations were of Big Anthony turning into a handsome man as he truly looked like a prince that came out of fairy tales as his brown and unattractive shoes becomes beautiful tall boots and his mattered blond hair becomes elegantly combed out.

Overall, “Big Anthony and the Magic Ring” is a brilliant book for fans of the “Strega Nona” series and for children who enjoy reading Italian folktales. I would recommend this book to children ages five and up since smaller children might have trouble understanding the Italian language used in this book.