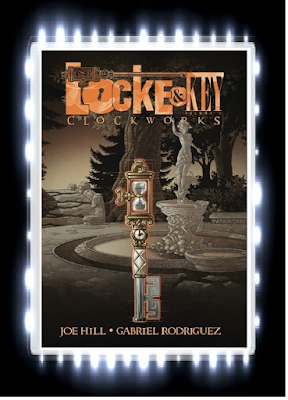 After reading the previous four volumes of Joe Hill’s highly acclaimed graphic novel series “Locke and Key,” I was trying to figure out for the longest time about what the Locke kids’ father, Rendell Locke, knew about the keys that are located in the Lovecraft house.  Well, let me proudly say that “Locke and Key: Clockworks” will reveal everything about the origin of the keys and the main villain himself!

Even though Tyler and Kinsey Locke managed to defeat Lucas “Dodge” Caravaggio in the last volume, it turns out that Lucas now possesses the body of the youngest Locke child, Bode!  Not only that, but Tyler and Kinsey stumbled upon a mysterious key that would allow the kids to time travel and it was then that they decided to explore their deceased father’s past.  What would Tyler and Kinsey find and will the revelation destroy them or will it help prepare them for the battle ahead?

Joe Hill’s writing: Wow! Joe Hill just continues to amaze me with his dramatic and emotional writing on the “Locke and Key” series!  Over the course of the series, I have been wondering about how the Locke kids’ deceased father was connected to the keys that the kids discovered in the house.  So, imagine my delight when I came across a volume that would reveal everything about Rendell Locke and his connection with the keys! I loved the way that Joe Hill used the time travelling aspect of the story to reveal to the audience about how the past would affect Tyler and Kinsey and the upcoming battle that they will have to face.  I also loved the fact that Joe Hill brought so much emotion in this volume as I really felt traumatized when I saw how the past events that happened to Rendell really affected him and his friends for many years.  I also loved how all the pieces are coming together in this volume as there were vague hints about how Lucas ties into the Locke kids’ father’s past and it was great to see those hints being put to full circle here.  Joe Hill had done a fantastic job at making this volume truly frightening and intense as I was literally on the edge of my seat whenever the Locke kids were going on these frightening adventures to discover the truth about their father.

Probably the only issue with this book is the strong language and the gory violence.  Even though the strong language in this book does not show up as often as in the previous books, there are still mentions of the “f” and the “s” words littered in some of the panels.  Also, there is some strong violence in this volume which includes characters having their heads cut off and blood splattering all over the panels.  This might be uncomfortable for anyone who does not like seeing gore in any graphic novel.

Overall, “Locke and Key: Clockworks” is definitely what I would call a “WHAM” volume as everything is finally revealed about each character and the result is ALARMING!  Now that I know everything about the main villain and the characters’ pasts, I am definitely looking forward to reading the sixth volume of this series!