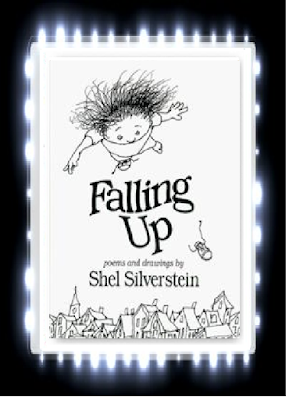 This is another book that has a set of Shel Silverstein’s famous poems and some of the poems featured in this book include:

I tripped on my shoelace
And I fell up-
Up to the roof tops,
Up over the town,
Up past the tree tops,
Up over the mountains,
Up where the colors
Blend into the sounds.
But it got me so dizzy
When I looked around,
I got sick to my stomach
And I threw down.

Once again, Shel Silverstein had piqued my interest in his talent for writing surreal and hilarious poetry that interest children as well as adults!  I loved the wacky style that Shel Silverstein puts into the poems as the characters are always doing bizarre things such as in the poem “Complainin’ Jack” where a Jack-in-a-box just complains all day and in the poem “Rotten Convention” where there is a vast array of horrible characters such as Hamburger Face and Gruesome Grace attending a convention.  I also loved Shel Silverstein’s artwork as it is mostly in black and white colorings and is truly surreal to look at.  Probably my favorite illustrations in this book was of the image of the pet lion in the poem “Unfair” as it looked incredibly creepy and surreal at the same time and the characters from the poem “Rotten Convention” as they look truly frightening and surreal, especially the image of a man who has a knife going through his head.

Parents should know that like most of Shel Silverstein’s books, there are some poems that might either frighten children or cause them to perform the crazy stunts that the characters did in this book.  Probably some of the most suggestive poems in this book would be “Crazy Dream” which involves a child having a dream about torturing his teachers and that might convince small children to do the same and “Spoiled Brat” where a child is eaten alive which would frighten small children.  Parents should probably read this book before they show it to their children to see if they can handle the content in this book.

Overall, “Falling Up” is a truly brilliant book that contains some of Shel Silverstein’s most memorable poems and many adults and children will definitely enjoy the wacky humor of these poems!  I would highly recommend this book to children ages six and up since there are some suggestive content in this book that adults might want to discuss with their children about.