[BOOK REVIEW] Daredevil: The Man Without Fear by Frank Miller 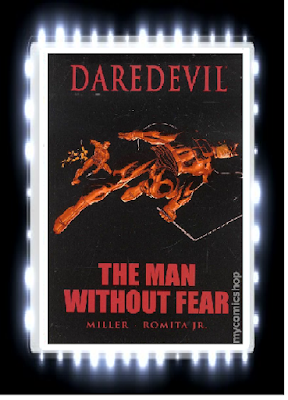 Title:  Daredevil: The Man Without Fear

Now, to be honest, I had never read a “Daredevil” comic book in all my life.  The only way I knew about Daredevil himself was through the movie starring Ben Affleck that I saw years ago.  However, after I saw the movie, I decided to check out some “Daredevil” comics and I stumbled upon Frank Miller’s version of the classic vigilante called “Daredevil: The Man Without Fear!”   First of all, this is basically a retelling of Daredevil’s origin story since Daredevil originated in 1964. Second of all, this is the first “Daredevil” comic I had ever read about, so imagine my glee at picking this comic up!

This story basically explains about how Matt Murdock became the daring do-gooder, Daredevil! It also shows the relationship between Matt and his famous boxer father Jack Murdock, Matt’s encounter with the mysterious Elektra and how Matt tries to save a young girl from the evil forces of the Kingpin!

Frank Miller’s writing: I have been reading many of Frank Miller’s works, with his work on “Batman” being the ones I had read the most, and I had enjoyed his work so far.  After I heard that Frank Miller worked on the retelling for “Daredevil,” I just had to pick this comic up!  I loved the way that the Frank Miller made this story have a dark and gritty feel to it, which is reminiscent of his “Batman” comics (though I wonder if that is where the inspiration came from). I also loved the sort of poetic way that Frank Miller narrates this story, as it gave the comic a lot more emotion.  One of my favorite passages in this comic involved a brief description of the winter weather, which went like this:

“It’s outside, everywhere outside.  It’s the wind and everything it carries; everything it touches.  It charges off the ocean, fierce, bitter cold.  It rattles antennae and shakes power lines and leaves swirling snow in its wake. It roars down concrete canyons and brittle branches clatter in combat; surrendering winter leaves that rustle and skitter like fairies, begging Matt to join the dance. The city that never sleeps!”

I also loved the character progression for Matt Murdock himself as he starts learning that he must obey the law while trying to stop criminals from hurting innocent people and it was done in a natural way that really suits the story.

The only problem with this comic is that there is some strong violence where characters are shot and blood just spurts out in pools.  Also, there is some language in this comic, although it is not anything worse than what I usually see in some Vertigo comics.

Overall, “Daredevil: The Man Without Fear” is a fantastic read for anyone who is just getting into the “Daredevil” comics!  I would highly recommend this comic to “Daredevil” fans everywhere!