[BOOK REVIEW] Tempt Me at Twilight by Lisa Kleypas 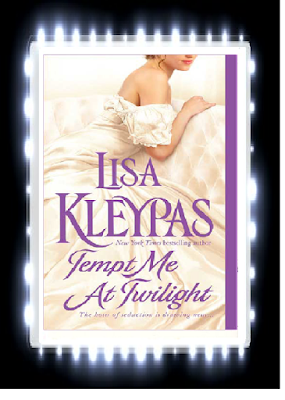 Title: Tempt Me at Twilight

I have been reading much of Lisa Kleypas’ popular “Hathaway” series and I have finally picked up the third book in the series, “Tempt Me at Twilight” starring Poppy Hathaway!  This novel is just as dramatic, intense and full of hot romance as the first two books in this series and it makes for one exciting read!

Poppy Hathaway always wanted a normal life since living with her family, the Hathaways, is anything but normal.  One strange night however, Poppy meets up with a mysterious man named Harry Rutledge, who turns out to be the owner of a very rich and well-known hotel in London and he had his eyes on Poppy for a long time.  However, when a scandal between Poppy and Harry threatened to ruin Poppy’s chances at a normal life, Harry offered to marry her to save her reputation.  As soon as Poppy married Harry, she realizes that Harry has a deep and dark side to himself that is making her not trust Harry, but will fate bring these two different lovers together?

Wow! Just wow! I never would have thought that a romance novel with a bad boy hero would turn out to be so sexy and brilliant!  Lisa Kleypas has certainly done an excellent job at writing this story about love and betrayal and it is done in the most ingenious way possible!  As usual, I loved the way that Lisa Kleypas wrote the Hathaway family to be extremely eccentric (according to the society they live in) yet hilarious and loving to read about and I especially loved the way that the Hathaway family stood by Poppy’s side when she was involved in the scandal with Harry Rutledge and it was also interesting seeing Leo being the brave and supportive brother that he really is.  What I truly loved about this book was the love/hate relationship between Harry and Poppy as it was quite unusual to read about two lovers who constantly spend most of the book arguing, but start making love to each other the moment the argument’s over!  I really loved the characterization of Poppy Hathaway as she truly does have a good heart and when her loved ones were in danger, she immediately took action and let no one stop her!  Now here is an interesting hero that I really grew on and that is Harry Rutledge!  Harry Rutledge was a truly interesting hero as he started out as a villain (even though he warned Poppy that he is an A-Class villain) but once I realized why he is acting like a villain, I just immediately grew soft for the intense and sexy guy!  I also enjoyed seeing the intense love that Harry has for Poppy to the point where he would do anything to keep her by his side, even facing Death himself to get her back.  The sex scenes in this novel are beyond hot and sizzling, they are truly unbelievably sensational!  This novel is stock full of sex scenes between Harry and Poppy, which will definitely have you panting with anticipation every time you read them!

For those who do not like sex scenes, this novel is full of sex scenes, so it might be best to skim over these scenes if they cause discomfort.

Overall, “Tempt Me At Twilight” is clearly the most emotional book written out of the “Hathaway” series and it is definitely going on my list of books to reread!  I am definitely looking forward to the next book in the series, which stars Leo Hathaway, “Married by Morning!”