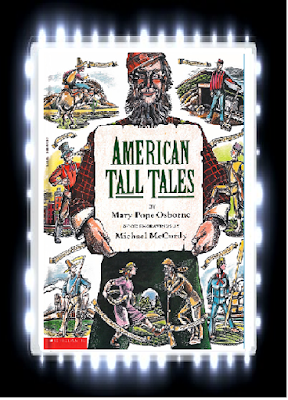 “American Tall Tales” is a set of tales from famous tall tale heroes of the west, African-American history, and of the Mississippi. Mary Pope Osborne’s hilarious retelling of the American heroes and Michael McCurdy’s wood engraved drawings both make these set of collections an instant treat.

“American Tall Tales” is a great book about tall tale legends that made a difference in the world. One of the best advantages in this book is the colorful characters. Each tall tale character is a portrait of self confidence and perseverance and each try to achieve their goals and therefore, become great figures in history. A couple of great examples would be of Mose the Fireman who volunteers to save innocent lives, regardless of him not being paid for his work. Mose lives to help people in danger of losing their lives in a fire and would stop at nothing to make sure that the people get out of the dangerous situations that they are in alive. Another great example would be John Henry, who sacrificed his life to save the duties of the other workers so that they would not lose their jobs to the drill machine. Michael McCurdy’s wood engraved drawings are magnificent as he gives this book an old-fashioned style, especially when he creatively illustrates each tall tale character as tough yet friendly looking figures.

“American Tall Tales” is probably the greatest retelling of America’s greatest tall tale heroes and how they made a difference during their time and helped encouraged modern day readers to believe in themselves and do the right thing. Parents who want to teach their children about American Folktales would be interested in this book as it is suitable for children ages five years and older.