[BOOK REVIEW] It Had to Be You by Susan Elizabeth Phillips 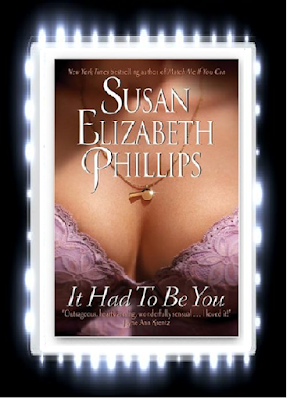 Title:  It Had to Be You

To be honest, I have always been a huge fan of historical romance since it takes me to a time that is so completely different from the current times.  However, after reading this little gem of a romance novel, I started to gain interest in the world of contemporary romance.  “It Had To Be You” was the first romance novel I have read from author Susan Elizabeth Phillips and after I had read this book, I am definitely looking forward to reading more of her wonderful books! “It Had To Be You” is full of hot, sizzling romance, pure football fun and drama that will set any romance fans’ heads spinning!

Alright, so now that you saw the cover of this book (a blown up photo of a woman’s chest) you are probably thinking that this book would turn out to be too kinky for anyone’s taste in romance novels.  NO, that is not so!  Susan Elizabeth Phillips has not only written a romance novel full of hot and sizzling love scenes, but she wrote a romance novel that is full of drama and love!  Susan Elizabeth Phillips made the characters come to life in this novel, especially Phoebe Somerville and Dan Calebow!  Let me just say that I just love Phoebe Somerville to death! Not only is Phoebe truly attractive to the boys, but she is extremely independent and I loved the way that she handles the football team with so much confidence, despite the fact that she does not know anything about football.  I also loved the fact that Phoebe is always so determined to do everything right, no matter how hard the task is and I loved her relationship with her younger half-sister Molly and her attempts to make Molly see her as a good person, which truly makes Phoebe into such a caring heroine.  It was also heartbreaking in hearing about Phoebe’s childhood and how she was raped at such a young age.  I truly felt for her character when she experienced that horrible event and it was understandable why she would not let Dan near her in the first place.  Now onto the good part and that’s the all handsome and all muscle hero, Dan Calebow!  Dan Calebow is clearly one of my favorite romance heroes of all time because even though he has a terrible temper, he can be so caring and funny towards Phoebe and his dedication to football is truly inspiring in his nature.  Also, his dream of marrying a woman who loves children and wants to start a family with him, is just so sweet and dreamy!  I just love men who are so caring about having a family of their own to take care of!  And do not forget the love scenes between Phoebe and Dan! They are truly smoking and romance fans everywhere will definitely be fanning themselves once they read through these love scenes between Dan and Phoebe!

Overall, “It Had To Be You” is easily one of the best contemporary romances ever written and anyone who is interested in reading romance novels that deal with the love of sports has got to check this novel out!