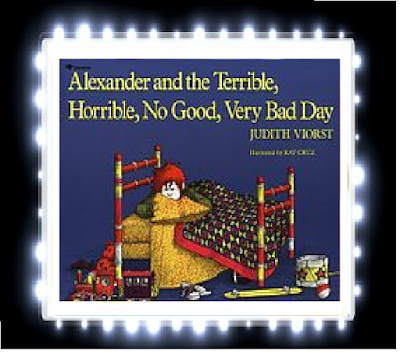 I have clearly enjoyed this book as Judith Viorst has done a great job at writing this book and Ray Cruz’s illustrations also contribute greatly to the story’s humor.  Judith Viorst makes the story extremely humorous and creative as the book is narrated by Alexander himself as he tells the audience about the terrible day he is having and many children will definitely relate to Alexander’s situation as the situation appears from his own perspective.  I also understand Alexander’s predicament since I had my share of bad days and I wished that I was somewhere else rather than the place I am at now when I am having a bad day.  Ray Cruz’s illustrations are simply beautiful and hilarious, especially the image of Alexander with his matted hair and a scowl on his face all throughout the book.  I also loved the black and white coloring used in this book as it reflects an old-fashioned feel to the story in a modern world.

“Alexander and the Terrible, Horrible, No Good, Very Bad Day” is truly one of the most inspirational books for children who have had their share of bad days and I’m definitely sure that many children will enjoy this book as much as I did!  I would recommend this book to children ages four and up since there is nothing inappropriate in this book.