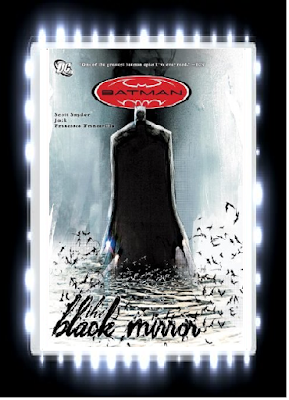 Lately, I have been reading many “Batman” comics that came out during the 1980s and the 1990s, so that way I could be caught up with the “Batman” universe.  But, after discovering some newer “Batman” comics, I wanted to try out some and one of the “Batman” stories that I had checked out was “Batman: The Black Mirror.”  Now, after reading “Batman: Hush,” I said to myself that I wanted to read more “Batman” stories that featured Dick Grayson since I loved his character in “Batman: Hush.” Well, imagine my surprise when I discovered that “Batman: The Black Mirror” was actually Dick Grayson’s story! Well, what could I say?  This was definitely one wallop of a story that would be hard to review because of so much going on in one graphic novel, but I will definitely do my best to express my intense love for this comic book!

After the events of “Final Crisis,” Bruce Wayne, the real Batman, decided to create a superhero group that consists of other “Batmans” called “Batman Incorporated.”  So, Dick Grayson is forced to take on the mantle as the new Batman for Gotham City, while working with Oracle (Barbara Gordon) and Red Robin (Tim Drake) on various crimes that plague the city.

BUT THAT IS NOT THE STORY HERE!

The actual story here is that Dick Grayson, now Batman, has uncovered a terrifying and strange case when he discovers that a nightmarish auction is being held where the criminals of Gotham City’s possessions are all being sold to the rich citizens of Gotham City.  Little does Dick Grayson, know it seems to be a plot to trap Batman once and for all!  Meanwhile, Commissioner Jim Gordon’s past catches up to him when his psychotic son, James Gordon Jr. comes to visit Gotham City and convinces his father and his step sister, Barbara Gordon, that he is a changed man and is trying to get back on the right path.  But, has James Gordon Jr. really changed or is he up to no good?

Scott Snyder’s writing: WOW! All I could say is…WOW!  After reading Scott Snyder’s fantastic work on “American Vampire,” I just had to see how well Scott Snyder can write the famous dark knight!  I was actually pleasantly surprised that Scott Snyder managed to write Dick Grayson extremely well as Dick Grayson might have some serious moments to his personality, but I loved the fact that Dick is much more laid-back than Bruce Wayne and that he is willing to help anyone in their time of need.  It clearly shows when Dick Grayson dons the Batman costume as his personality is less menacing than Bruce Wayne’s and he makes a couple of jokes or two towards his enemies.  I also loved the relationship shown between Commissioner Jim Gordon and Dick Grayson as Jim Gordon holds the same respect for Dick that he held for Bruce Wayne.  But what really sold the story for me was the fact that it was focused on how the characters viewed Gotham City as being a place full of corruption and how it affected them.  I really enjoyed the storyline with James Gordon Jr. as he is a new character that I had never read about before, but Scott Snyder did a brilliant job at making him extremely creepy as you do not really know his true motives and yet, he can act so innocent at the drop of a hat.  If I were to list one of the creepiest characters to ever appear in a “Batman” comic, then James Gordon Jr. would definitely be on that list!  I also loved the way that Scott Snyder provided an extremely dark and gritty atmosphere to this story as it may have snippets of “American Vampire” in it (well, it is written by Scott Snyder, who also written “American Vampire”), but it worked so well with the “Batman” universe and it just made the story even more interesting to read!

Out of all the “Batman” comics I had read so far, this is seriously one of the most disturbing stories I had ever read, next to “Batman: the Killing Joke.”  Anyone who does not like reading about serial killers or disturbing psychological issues might be a bit disturbed with this story.  Also, this story has many gory scenes of characters getting cut up and killed that some readers might find a bit uncomfortable to read through.

Overall, “Batman: The Black Mirror” is easily one of the best current “Batman” stories around and anyone who is a huge fan of Dick Grayson will definitely love this comic!