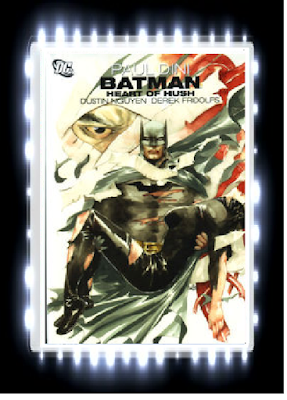 After reading “Batman: Hush,” I really got interested in Hush’s character and where he came from since we only saw half of his story in the original story.  But thankfully, some of my reading friends managed to recommend me a story that continues the storyline from “Batman: Hush” and it is called “Batman: Heart of Hush!” With great writing from Paul Dini, who also wrote some of the episodes from “Batman: the Animated Series,” “Batman: Heart of Hush” is definitely one comic you have to check out!

Hush, also known as Tommy Elliot, is back with a vengeance and he is planning on making Batman suffer more than ever before!  After using the same tactics which involves trying to break Batman’s spirit by using his greatest foes to fight him, Hush manages to accomplish his ultimate goal in breaking Batman and that is kidnapping Catwoman!  Can Batman save Catwoman from Hush before it is too late?

Paul Dini’s writing: After seeing that Paul Dini had written stories for the “Batman” franchise before, which was writing some of the episodes in “Batman: The Animated Series,” the animated series that basically introduced me to the world of “Batman,” I was pleasantly surprised to see that Paul Dini had also written some stories for the “Batman” comics. “Batman: Heart of Hush” was basically the first “Batman” comic book story I had read from Paul Dini and it really started hooking me to his work!  Paul Dini had done a great job at providing a more detailed back story on Tommy Elliot in this graphic novel since in Jeph Loeb’s story of “Batman: Hush,” he was shown to be Bruce Wayne’s childhood friend, but that was basically all we got from his character. In this graphic novel however, we get to see how Tommy’s childhood had affected him as a character and how he started leading his life as the notorious villain Hush.  Paul Dini also did a fantastic job at making Hush into a calculating villain who knows Batman’s weaknesses and uses it against him, as it truly makes Hush into one of Batman’s most dangerous villains since the Joker!  The creepy atmosphere that Paul Dini provided for this story was portrayed greatly as we can feel tension whenever Hush is introduced into the story and the mystery that surrounds the characters and Hush’s plan truly made this story interesting to read through!

One of my biggest issues with this graphic novel was that I felt that the story was a bit too short and that many characters other than Tommy Elliot were not quite fleshed out like in “Batman: Hush.” I understand that this is Tommy Elliot’s story, but I wanted to see more of Nightwing and Catwoman like I did in “Batman: Hush” and have the story expand more on their perspectives on Hush and how Hush affected them as characters.  I also wanted to see more romantic moments between Catwoman and Batman since it would have brought more depth to Batman’s determination to rescue Catwoman.  Also, even though I usually do not let the artwork affect my reading of comics at times, I felt that the artwork in this comic was not as memorable as Jim Lee’s artwork and that the characters do not look as attractive as they did in “Batman: Hush.”

Overall, even though I had some problems with “Batman: Heart of Hush” and I still consider “Batman: Hush” to be a better story, it was still a truly interesting read and a great follow up to “Batman: Hush” and “Batman” fans will definitely enjoy this book!