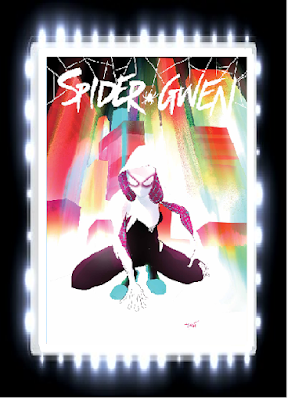 Wait a minute…Gwen Stacy is…SPIDER WOMAN!?  And who ever heard of a graphic novel having a volume 0?

Before you get confused about this (as I was), there was an event called “Spider-Verse” that might explain about all this (except that I haven’t read the “Spider-Verse” event yet, so that point might be moot at this time).  Anyway, I have been hearing so many good things about the “Spider-Gwen” series that I had to give “Spider-Gwen: Most Wanted? Volume Zero” a shot and I must admit that I actually liked this graphic novel!

In this universe, it was Gwen Stacy who was bitten by a radioactive spider and possessed spider powers (not Peter Parker).  It turns out that Peter Parker was bullied so much at school that one day he decided to transform himself into the lizard and went on a rampage throughout the city and ended up getting himself killed.  Because of this, Gwen harbored a lot of guilt over what happened to Peter since Peter was doing all this to be like Gwen.  After this tragic event, J. Jonah Jameson had caused the public to turn against Spider-Gwen by stating that she was responsible for Peter Parker’s death and Gwen ends up being on the run from the law, including from her father Captain Stacy (at least until she tells him who she really is).  Now Gwen has to prove to the public that she did not kill Peter Parker and that she is a true hero while also avoiding the people after her including Frank Castle (A.K.A. The Punisher), the Vulture and Matt Murdock himself!

Jason Latour’s writing:  Jason Latour’s writing was quite unique and interesting to read as this universe’s Gwen Stacy is one of the most interesting characters I had ever read!  I loved the way that Jason Latour made Gwen Stacy into such a strong female protagonist as Gwen also cracks jokes like Spider-Man, but she can be moody at times due to her guilt over Peter’s death and I loved the way that Jason Latour wrote Gwen’s struggles with trying to cope with Peter’s death as it made Gwen into a truly relatable character.   I also loved the fact that Gwen Stacy is involved in a rock band as it adds even more dimension to her character and I just loved the fact that we have a heroine who is into music!   I also enjoyed the moments between Gwen and her father, Captain Stacy, as while it was quite intense due to Captain Stacy not wanting his daughter to get in danger, it was nice seeing how much Captain Stacy cares about his daughter and only wants what is best for her.  Jason Latour also did an interesting job at giving us a Spider-Man universe where Gwen Stacy is Spider Woman as I never would have thought that Gwen Stacy of all people could become a superheroine.  But, this version of Gwen Stacy is so well written that I actually loved the fact that Gwen Stacy makes an interesting Spider Woman!

The reason why I gave this book a four-star rating was because I felt that the dialogue was a bit disjointed at times.  I was not sure if it was because the dialogue was trying to use street slang to make the characters seem more modern or if it was the writing itself.  I often had a difficult time trying to understand what the characters are actually saying due to how the dialogue is being written.  Also, if you have not read “Spider-Verse,” chances are you will probably be confused about what is really going on in this book (although this is technically an alternate universe of the “Spider-Man” universe).

Overall, “Spider-Gwen: Most Wanted? Volume Zero” is a great graphic novel to read if you want to see a different take on Gwen Stacy!