[AUDIOBOOK REVIEW] Rabbit Ears Treasury of Fairy Tales and Other Stories: Thumbelina, The Talking Eggs, The Fisherman and His Wife, The Emperor and the Nightingale 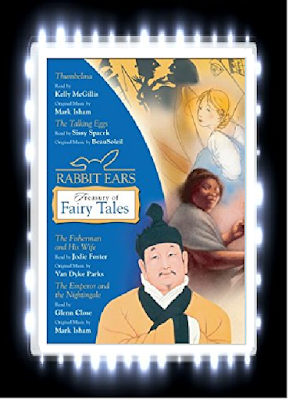 When I first heard that Rabbit Ears was finally releasing their classic stories on audio CDs, I was so excited and happy because not only will I have the pleasure of listening to these fantastic classics over and over again, but now everyone will have a chance to listen to this fantastic series! “Rabbit Ears Treasury of Fairy Tales” is an audio cd that is full of various fairy tales created by Rabbit Ears and with a vast array of famous celebrities along with engaging music for each story, this audio cd is a delightful treat for both children and adults!

Since I have reviewed half of these stories already, I am just going to briefly summarize each story on this audio cd:
The Fisherman and his Wife
Told by: Jodie Foster
Music by: Van Dyke Parks
In this Brothers Grimm tale, a meek fisherman stumbles upon a magical flounder who promises the poor fisherman that he will grant him several wishes if he frees him. When the Fisherman told his wife about this, his wife suddenly gets greedy and she starts wishing like crazy.
The Talking Eggs
Told by: Sissy Spacek
Music by: Micheal Doucet dit Beausoleil
A kind girl named Blanchett learns about the importance of being kind towards other and how it brings its own rewards.
Thumbelina
Told by: Kelly McGillis
Music by: Mark Isham
A tiny little girl named Thumbelina, who is no bigger than a thumb goes on a wild adventure in the outside world that changes her life forever.
The Emperor and the Nightingale
Told by: Glenn Close
Music by: Mark Isham
An Emperor learns about the importance of the real thing when the real nightingale has to save the Emperor from a horrible fate.

Oh my goodness!! Never would I have thought that I would enjoy this series now as much as I did as a child! Every narrator on this audio CD has greatly contributed enough excitement and tenderness to each of these stories that will have any child and adult listening to this series over and over again! Out of all four of these stories presented in this audio cd, my favorites were “The Talking Eggs” and “The Emperor and the Nightingale.” In “The Talking Eggs” Sissy Spacek has indeed done an excellent job at narrating this story as she provides a Southern flair to the story and actually puts so much emotion in her narration whenever she is enacting a character yelling or being soft-hearted. Micheal Doucet dit Beausoleil’s music is clearly catchy and inspiring as it has a slight country theme that will have many children toe-tapping to the music until the very end of the story! In “The Emperor and the Nightingale,” Glenn Close does a splendid job at narrating this story as she sounds extremely tender and soothing and Mark Isham’s music provides a magnificent presentation of Chinese inspired music that will have everyone be mesmerized by the music.

The only problem I had with this audio CD was that it did not come with a book or in this case, books, to accompany each story. For anyone who has grown up with the Rabbit Ears series since they were children might possibly be disappointed in not receiving a book to go with each story. However, because the celebrities’ narrations are so effective and creative, this audio cd is still a treat to listen to.

Overall “Rabbit Ears Treasury of Fairy Tales” is a fantastic audio cd for both children and adults who love reading old classics and fairytales and will be an instant treat for many years!