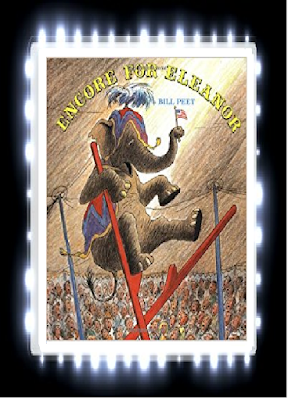 “Encore for Eleanor” is a cute story by Bill about an old elephant named Eleanor who was once a great circus performer, but was moved to the zoo when she got too old to play her part.  It was then at the zoo that Eleanor learns a new special ability that might jumpstart her career again.  “Encore for Eleanor” is a great book for children who want to discover new talents for themselves and realize that everyone is special in their own way.

Eleanor the elephant was once a great circus star who would stand on stilts and impressed the audience to no end.  One day however, since Eleanor has been performing in the circus for forty years, Eleanor’s knees were weak and suddenly, she fell off the stilts and landed on the floor with a hard crash!  Eleanor began to worry that her boss, Colonel T.J. Tinglehoffer was going to send her away because of her ruining her act by falling off the stilts.  Sure enough, Colonel Tinglehoffer did send Eleanor away to the zoo and Eleanor bade a tearful goodbye to her friends at the circus.
Even though Eleanor had plenty to eat and good home to stay in, she still missed the circus life and was miserable because she felt like she could not do anything extraordinary like she used to do in the circus.  One day, however Eleanor awoke to find a teenage girl trying to draw a rhinoceros on her canvas.  Of course, when the rhinoceros moved and girl could not draw the rhinoceros, the girl became angry and threw her charcoal to the ground.  Eleanor was so interested in what the girl was doing, that she wanted to learn how to draw also.  So, when the girl went off to see some ducks in the pond, Eleanor slyly picked up the charcoal and she decided to draw one of the clowns from the circus.  However, Eleanor was soon discovered drawing the picture by the teenage girl and the teenage girl was so impressed by the drawing that she decided to show the picture to everyone.  Everyone was impressed except for Mr. McJunkens, who did not believe that Eleanor drew the clown.  Eleanor was so mad that she grabbed the charcoal and…

What does Eleanor draw and will she able to convince Mr. McJunkens that she can really draw?


Read the rest of the book to find out!

Bill Peet’s story of an old elephant who wants to be special again is extremely cute and brilliant for children to read.  The scene that stood out the most for me was the scene where Eleanor learns how to draw after she witnesses the teenage girl drawing the rhinoceros.  That scene was so amazing because you would have never imagined an elephant drawing such a great picture and drew the picture in a matter of seconds.  Bill Peet’s illustrations are beautiful and detailed, especially of the image of Eleanor herself as she looks beautiful in her circus outfit and yet, she maintains wise appearance throughout the story telling the audience that she has indeed aged after performing in the circus for forty years.

“Encore for Eleanor” is a great book about the importance of trying out new activities in life to keep your life going and will surely encourage many children to follow what they believe in and do many new things in their lives.  I would recommend this book to children ages four and up since there is nothing inappropriate in this book.