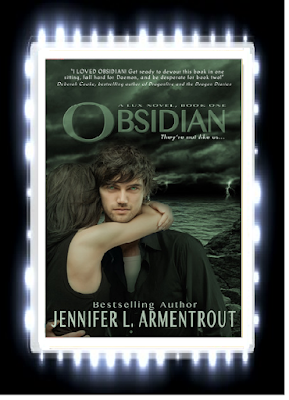 Now, I have read many paranormal romances that have vampires, werewolves and angels as main characters, but this is seriously the first time that I had read a paranormal romance that has ALIENS in it!  Jennifer L. Armentrout’s first book in the “Lux” series “Obsidian” is seriously one novel you should check out right away!

Katy Swartz was the new girl who moved to West Virginia from Florida with her mom so that they could start a new life after Katy’s dad died a few years back.  After they settled themselves into their new home, Katy goes to meet her next door neighbor Daemon Black and it turned out that Daemon was being a complete jerk to her.  Just when Katy believed that she and Daemon will never get along, Katy is suddenly attacked by a mysterious and dangerous force one night and Daemon ends up saving her life.  It was then that Katy discovered that there is something…supernatural about Daemon and because Daemon saved her life, she ended up having a trace on her that could lead the enemy right to her.   The only way to get the trace off of her is if she spends some time with Daemon…provided that she does not kill Daemon first!

Wow! Seriously, it took me this long to check this book out?  Anyway, I seriously ADORED this book to death!  Jennifer L. Armentrout has done a fantastic job at building up the tension between Katy and Daemon and also layering hints throughout the story about Daemon’s mysterious supernatural abilities.  I really enjoyed all of the characters in this book as they all have their funny moments and their tragic moments and I loved the way that Jennifer L. Armentrout was able to balance the drama and comedy in this book!  I also loved the supernatural elements in this story as they give this story lots of tension as you are wondering what will happen to these characters next if they are not careful of their surroundings.  Probably my most favorite characters in this book are Daemon and Katy themselves as they are the main characters of this book and I found their constant bickering amongst each other to be hilarious and witty at the same time.  I really loved Daemon himself, as he is shown to be a gruff and rude guy, but is willing to protect everyone that he cares about.  Now, sometimes whenever a hero or a heroine is too much of a jerk to be a likable character, then I tend to get turned off by the book because I could not get into the characters.  However, in the case of Daemon, I really enjoyed his character as his rude behavior made him a bit more complex due to the need to keep his true identity a secret and his need to protect the ones he loves, especially his sister Dee.  I also love the constant attention we get to Daemon’s good looks (especially his ripped pecs) as I was practically swooning every time they mention Daemon’s good looks!  Katy was another character I really enjoyed as she, like Daemon, can be a bit rude towards some people, but is generally a nice person and is also willing to protect the ones she loves.  And last but not least, we have Dee, Daemon’s friendlier twin sister and I really love Dee because she is probably the nicest and most positive character in the entire book as she tries to get Daemon and Katy together and she always sees the good in people, even if other people do not see it.

For anyone who does not like strong violence and language, this book has a surprising amount of strong language that you normally would not see in most young adult novels.  There are also some moments of intense violence and one near rape scene that might be uncomfortable for some readers to handle.

Overall, “Obsidian” is a truly fantastic novel that fans of paranormal romance will enjoy and now, I am checking out the second book of the “Lux” series “Onyx!”