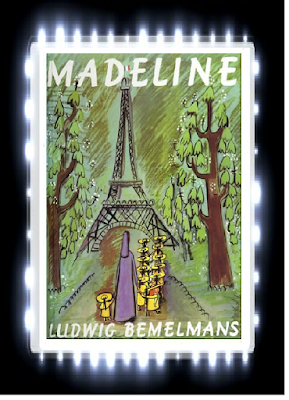 “Madeline” is the first book created by Ludwig Bemelmans for his “Madeline” series and has won the Caldecott Honor Book Award.  This book basically details Madeline’s earliest adventures from standing up bravely to a ferioucious tiger to having a bad case of appendicitis.

Ludwig Bemelmans’ writing is creative and sweet as he writes the story in a rhyming text that efficiently narrates the story.  The story of how Madeline suffers from appendicitis and how Miss Clavel and the other girls cared enough to visit her in her feeble condition is both intense as we see Madeline crying and heartwarming as Miss Clavel and the girls worry about her conditon.   This scene reminds me of a true mother to daughter scene as Miss Clavel acts like a protective mother over Madeline and the girls and tries everything she could to make sure that Madeline’s condition does not worsen before she could get her to the hospital, something a mother would do for her child if her child suffered an illness.  Ludwig Bemelmans’ illustrations are simplistic and creative, especially of the images of the landscape of Paris including the Eiffel Tower being colorful while the regular situations between the girls and Miss Clavel are in yellow, white, and black colors.

“Madeline” is one of Ludwig Bemelmans’ finest book yet since it led to “Madeline” having many sequels and even a television series that was popular during the mid 90’s.  I would recommend this book to children ages five and up since some of the French language in the text would be a bit difficult for younger children to understand.