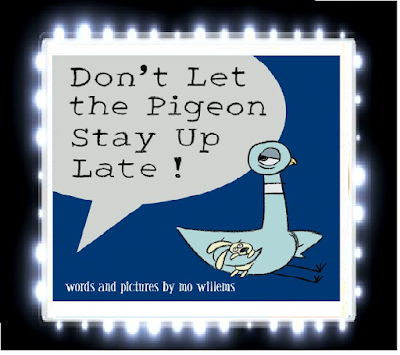 Once again, Mo Willems has amazed me with his witty dialogues and humorous illustrations in his popular “Pigeon” series!  I loved the way that Mo Willems made the dialogue simplistic enough for small children to get a grasp on what is going on with Pigeon and yet is able to make the dialogue from the Pigeon hilarious enough for adults to enjoy.  I loved the way that the Pigeon tries to persuade the readers to let him stay up late as many hilarious dialogues pop up whenever he is trying to convince everyone that he should stay up late.  One of my most favorite quotes from the Pigeon was this:

“How about five more minutes?  Come on! What’s five minutes in the grand scheme of things!?”

Mo Willems also did a fantastic job at exploring a parent’s frustrations at getting their own children to go to bed and having the Pigeon trying to persuade the readers to let him stay up late is really something that many parents would enjoy reading over and over again!  I also loved Mo Willems’ illustrations as they were hilarious to look at and I also loved the simplistic drawings of the illustrations as they were extremely cute to look at!  I really loved the image of the Pigeon himself as he has blue fur and constantly has crazy expressions on his face whenever he desperately wants events to go his way.

Overall, “Don’t Let the Pigeon Stay Up Late” is a fantastic book for anyone who is a huge fan of the “Pigeon” series and for parents who also had trouble getting their children to go to bed!  I would recommend this book to children ages three and up since the writing is simple enough for younger children to understand.