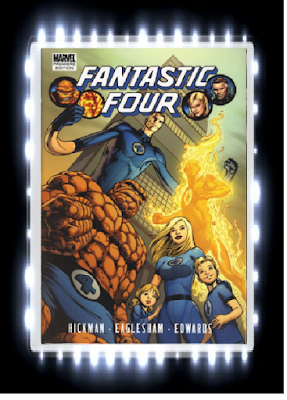 I have heard of the Fantastic Four for many years and I had seen most of the movies and the TV shows that was based on them.  However, I never picked up a comic of the “Fantastic Four” until recently, since I am a huge “X-Men” fan and I have been constantly reading their comics for years now.  After hearing so many good things about Jonathan Hickman’s run on “Fantastic Four,” I just had to give this series a shot and see if it was worth checking out.  Well, I was really amazed by how well this volume came out to be and now I am more interested in seeing more of Jonathan Hickman’s run on “Fantastic Four!”

The story starts off with Reed Richards going to an alternative universe where he meets several different versions of himself so that he can figure out the answer to his question “Solve everything.” However, when Reed discovers that he must give up something that is so precious to him to be able to solve everything; will he go through with joining the other Reeds to obtain what he truly wanted?  Also, in this volume, Johnny Storm and Ben Grimm travel to the Nu-World for a hard earned vacation, but realize that terrible things are happening in the Nu-World.  Also, Franklin Richards gets a special guest for his birthday party!

Jonathan Hickman’s writing: Since this is the first comic book I had ever read from Jonathan Hickman (and the first “Fantastic Four” comic I had read), I was actually impressed with how well he has written the Fantastic Four characters.  The big thing that I look for in the “Fantastic Four” franchise is the fact that they are known as the first superhero family and I loved the way that Jonathan Hickman brought this to the forefront of this volume as Reed Richards has to struggle with supporting his family and obtaining the desire to solve everything in the world.  It really brought so much depth to this storyline and I loved the way that Jonathan Hickman really explored inside Reed Richards’ mind and why he feels the need to solve everything in the world.  I loved the way that Jonathan Hickman introduced some humorous moments into this volume, especially with the banter between Johnny Storm and Ben Grimm (The Thing) as they treat each other like brothers, arguing yet getting along at the same time.  I really liked the story about Franklin Richards, Reed and Sue’s son, having a birthday party since it made the characters so relatable and it was really cute seeing the members of the Power Pack come back together for Franklin’s birthday party!

The reason why I gave this volume a four star rating was because I felt that there were too many plot points going on in this volume and I got really confused by what was happening in some of the story arcs.  It is probably because this is my first read of the “Fantastic Four” and I am not used to the crazy adventures they have, so I was kind of left in the dust when reading about Reed’s adventures in the other dimension.  Also, even though this volume was supposedly meant to build up the big adventure that is in store for the Fantastic Four, there were many slow scenes in this volume and I wish that there was a bit more action in this volume to keep my interest going.