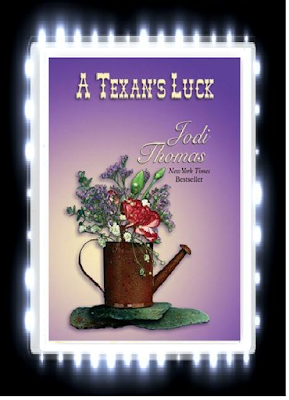 Content Rating:  Ages 18+ (Some Sex Scenes and Some Language)

After reading the first two books in Jodi Thomas’ fantastic “Wife Lottery” series, “The Texan’s Wager” and “When a Texan Gambles,” I was definitely looking forward to reading the third book in this series called “A Texan’s Luck” and man, was I in for an enjoyable ride!

The story starts off when Captain Walker Larson discovers a shocking revelation when a young and beautiful woman named Lacy Larson walks into his office and tells him that she is his wife.  Unfortunately, Walker has no intentions of having a wife and he sends Lacy away back to Cedar Point.  Three years later however, when Lacy thought that she got over her disappointment in meeting Walker Larson, Walker ends up back in her life again when he received word that Zeb Whitaker might be after her and he was stationed to protect her at all costs.  Unfortunately, Lacy, still upset over Walker shunning her years ago, wants nothing to do with Walker and wants him to leave in the next few days.  However, both Walker and Lacy will soon discover that they might have some feelings for each other despite their differences.

Wow!  I never thought that Jodi Thomas’ “Wife Lottery” series could possibly get even better over time!  Jodi Thomas’s writing in this book was so beautiful and emotional that I found myself really sympathizing with all of the characters’ ordeals.  I loved the way that Jodi Thomas portrayed the relationships between the characters, especially between Lacy and Walker themselves, who are my favorite characters in the entire book!  Lacy Larson was such an independent and kind hearted heroine who refuses to let anyone run her life.  I actually sympathized with Lacy at the beginning of the novel since she was scorned by Walker Larson and it was pretty understandable about why she hated Walker throughout most of the book since I probably would have held a little grudge myself if I was scorned like that.  I also loved the way that Lacy helped Walker understand more about how love works and the fact that she too was new at the whole “husband and wife” situation really brought out so much chemistry between her and Walker.  Probably the best character in this book was Walker Larson himself as he is unlike any other romantic hero I had ever read about before!  Walker Larson is shown to be a gruff, secretive and yet tortured character as he felt sorry for what he done to Lacy years ago and tries to make amends for it.  It was interesting seeing that Walker had trouble trying to sort out his feelings for Lacy due to him being in the army all the time and I loved the way that he tries hard to please Lacy and protect her at all times, despite his somewhat “cold” attitude.  Even though there were not enough sexual scenes to satisfy my romantic urges, the scenes where Walker and Lacy try to get to know each other by taking each other out to dinners and spending some quality “quiet” time together were probably the best scenes in this book and I really loved their witty banters with each other, especially this little gem:

“This day was endless not seeing you.  I want to get you alone.  I don’t feel like sharing you with the world right now.”

“I thought of being here with you like this all day.”

“I ached to hold you.  Half the time I didn’t even bother to listen to what others were saying.”

Overall, “A Texan’s Luck” is easily one of the most memorable books out of Jodi Thomas’ “Wife Lottery” series and anyone who is a huge fan of western romances should definitely give this novel a whirl!