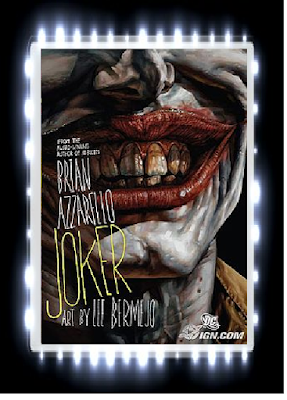 After reading the classic “Batman” tale, “Batman: The Killing Joke,” I wanted to read more stories about one of Batman’s most infamous villains, the Joker! So, I went ahead and picked up Brian Azzarello’s take on the Joker “Joker” and while it has many slow scenes, it was a truly interesting take on the psychotic mind of the Joker in a more dark and gritty way that I would have never imagined possible!

This story is being told from the viewpoint of one of the Joker’s newest henchmen, Jonny Frost and in this story; the Joker was just released from Arkham Asylum and he is NOT HAPPY!  The Joker just realized that while he was gone, his fellow villains, the Penguin, Killer Croc, The Riddler and Two-Face had sold off his properties and the Joker is planning on getting them back!  Be prepared for one violent and nightmare ride as we see how scary the Joker can be when he is really angry!

Brian Azzarello’s writing: Since this is the first time I had read any of Brian Azzarello’s works, I was actually impressed with how dark and gritty this story is and the fact that it fits so perfectly with the Joker’s insane nature.  I loved the fact that this story has a bit of crime noir in it as I am a huge fan of crime stories and it was interesting seeing the story being played out from a villain’s point of view.  What was so intriguing about this story was the fact that Brian Azzarello really showed the dark side of the Joker as the Joker spends most of this story committing horrible crimes and torturing his fellow criminals and yet, gets away with everything until the very end of the story.  I enjoyed the dark and gritty take on the Joker and he seems to remind me heavily of Heath Ledger’s version of the Joker in “The Dark Knight” movie as both characters were dark and were trying to prove a point to other people.  It was also interesting that we actually get a good look at the Joker from the perspective of his henchman since it added more dimension on how the Joker’s own henchman feels about the Joker himself.

Lee Bermejo’s artwork:  Lee Bermejo’s artwork may seem a bit scratchy in some panels, but in doing the close up images of the Joker looking so crazed and dramatic, it was truly beautiful!  I loved the way that Lee Bermejo painted the images of the Joker’s face close up as it truly looks disturbing since it seems like the Joker had cut his mouth open to make it look like an actual smile and that was truly disturbing to see!

The reason why I gave this comic a four star rating is that there were many slow scenes in this comic as most of the scenes basically dealt with the Joker just discussing with the other rogues gallery about how he wants to split the profits with them.  Also, there is some language and gory violence in this book, where the violence includes people getting shot and blood spurting out of the wounds and there is one REALLY DISTURBING scene that I cannot really say, but let us just say that it involves some SKIN RIPPING!