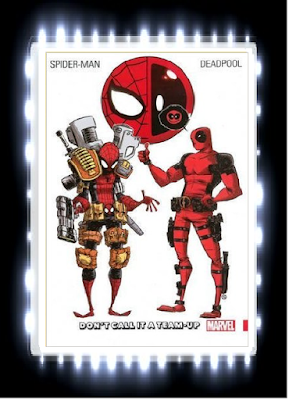 Now, I personally had never picked up a “Deadpool” comic book before since at the time, I was not that interested in reading anything about “Deadpool” despite his huge popularity.  It wasn’t until I watched the “Deadpool” movie starring Ryan Reynolds that I started getting (a bit) interested in the character and I have been trying to figure out where I needed to start reading about “Deadpool” in the comics. So, yeah thanks “Deadpool” movie for getting me into the comics (a bit)!  I had gotten several different recommendations from fellow readers and some have said that I should read either Joe Kelly’s run or Daniel Way’s run.  Since neither run was really available to me at the moment, I had decided to read this collection of stories where Deadpool teams up with Spider-Man called “Spider-Man/Deadpool Volume 0: Don’t Call it a Team-Up” since I had been reading lots of “Spider-Man” comics before this and I must say that this collection was quite good!

This is basically a collection of issues collected where Spider-Man and Deadpool teamed up with each other.  So, here are the issues featured in this collection and my ratings for each one:

When Deadpool and his prisoner Blind Al ended up going through time, they ended up in a timeline that takes place in the 47th issue of the 1960s “Amazing Spider-Man” series. In order to not to change the timeline, Deadpool and Blind Al have to masquerade as Peter Parker and Aunt May respectively.  They also found out that the only way to get out of this timeline is to find a younger Weasel and convince him to build a time machine for them to go back into.

Cable and Deadpool are working together to obtain a secret project called “Cone of Silence” and Deadpool is sent out to provide a distraction towards Spider-Man so that the plan can go by smoothly.

Deadpool and Spider-Man ended up getting into an insult match when they meet up with each other again, while a more sinister plan involving Madame Web is brewing in the background.

When a mysterious hit man (I am sorry, hit monkey) ends up killing various people in the city who have committed crimes, Spider-Man and Deadpool are forced to work together in order to take down this hit monkey once and for all!

Deadpool ends up working with Spider-Man in order to take down Daniel Gump.  But little does Deadpool know, Spider-Man’s body is currently being taken over by Doc Ock, after Peter Parker had “died” in the previous issues.

When the Chameleon caused Spider-Man to hallucinate various innocent people into being the Chameleon, Deadpool ends up taking over Spider-man’s mantle in order to locate the Chameleon and save Peter from these hallucinations.

The writing: I hit the jackpot in actually getting a collection of stories that features both Deadpool and Spider-Man.  I have been trying to find a way to get into the “Deadpool” comics, whether it would be through one run or through a collection of issues that would help me determine which run I should spend my time reading. Well, I must say that I found some of the issues in this collection to be pretty entertaining!  Some of my favorite issues in this volume (judging by the ratings that I gave for each issue) are “Deadpool (1997) Issue #11,” “Deadpool (2008) Issues #19-21,” and “Deadpool Annual Issue #2.” In “Deadpool (1997),” I loved the way that Joe Kelly wrote the time traveling story arc with Deadpool going back in time to the original 1960s “Amazing Spider-Man” run as I was laughing my head off with Deadpool acting like his crude self while dressing up as Peter Parker while insulting Peter’s friends (especially with him making fun of the Osborns’ hairstyles)!  In “Deadpool (2008),” I loved the way that Daniel Way wrote both Deadpool and Spider-Man as it was entertaining seeing them work together to take down a hitman who happens to be a monkey!  In “Deadpool Annual,” I loved the way that Christopher Hastings wrote this story as it was quite entertaining seeing Deadpool act like Spider-Man and seeing his enthusiasm at taking over the mantle while Spider-Man is knocked out.  I was happy to see Deadpool and Spider-Man interact with each other since I always wanted to see how Spider-Man and Deadpool would act around each other.  It was interesting seeing Spider-Man be the sane, straight man to Deadpool’s wacky wise guy as it made their relationship with each other much more entertaining!

The artwork:  The artwork in this volume was quite creative and gorgeous to look at, especially the artwork done by Pete Woods, Carlo Barberi and Jacopo Camagni.  I especially love the artwork in “Deadpool (1997)” as I loved the mixture of the modern artwork with the 1960’s artwork and it just made the story even funnier whenever we hear Deadpool’s crude comments clash with the family friendly 1960s artwork.

Overall, “Spider-Man / Deadpool Volume 0: Don’t Call It a Team-Up” is a great volume for anyone who is a huge fan of both Spider-Man and Deadpool and I would definitely give this volume a try!