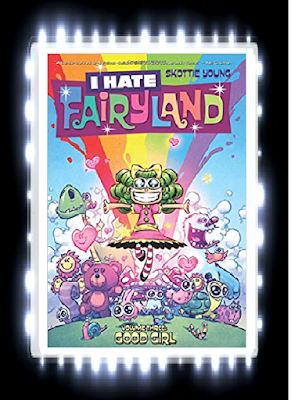 It seems like after the events of the last volume (her future self comes and tells her that if she does not change her ways, she could possibly doom Fairyland), Gertrude still has not learned her lesson that if she continues to kill people left and right, she could be heading for some big trouble.  That is until she meets up with a girl named Maddie, who is Gertrude’s biggest fan and Gertrude decides to teach Maddie everything about killing people to get what she wants.  But, when Maddie proved to be even worse than Gertrude, Gertrude then realizes what a terrible person she has been and she decides to try to become a better person in the long run.  However, knowing Gertrude, that is not going to be easy!

Skottie Young’s writing:  As usual, Skottie Young has done a fantastic job at writing this story as the story is both hilarious and shocking at the same time (especially, with that twist of an ending)!  I really loved the scenes where is Gertrude trying to become a better person by helping people, but since she is violent by nature, she cannot help but destroy the many things she comes across to.  It was a nice change of pace for the series as we finally get to see Gertrude actually act (a little) nicer towards the people she comes across to and it was also hilarious still seeing Gertrude destroy things, even though she tries really hard not to!  I also loved the way that Skottie Young further developed Larry the Fly’s character as we get to see that Larry actually does care about Gertrude, despite constantly snarking at her. We also get to see what his life would have been like without Gertrude and it was both sad and hilarious seeing his alternative life from his perspective.

Skottie Young and Dean Rankine’s artwork:  Skottie Young’s artwork is as usual hilarious to look at as all the characters look exaggerated and I especially loved the appearance of Gertrude herself as she looks like an evil version of “Shirley Temple!”  I also loved the artwork done by Dean Rankine in the issue where Larry the Fly starts dreaming about how his life would have turned out if he did not meet Gertrude as the artwork is even more cartoonish than most of the artwork in this volume and the art style actually reminds me of the art style from “Rocko’s Modern Life!”

For anyone who does not like gory violence, there is some gory violence in this volume, mainly during the scenes where characters are ripped apart and blown up in extremely bloody ways (all courtesy of Gertrude herself, of course)!  Also, this is a bit of a nitpick for me, but the narrative is a bit all over the place in this volume as Gertrude and Larry go on many different adventures in this volume and the narrative tends to jump from one situation to the next.  This would often confuse me as I was trying to figure out what the main plot of this volume was, although I will admit that the narrative is a bit more straightforward here than in the second volume.

Overall, “I Hate Fairyland Volume Three: Good Girl” is a truly fantastic volume that is full of hilarious (and violent) adventure along with a shocking twist of an ending that fans of the “I Hate Fairyland” series will definitely enjoy!