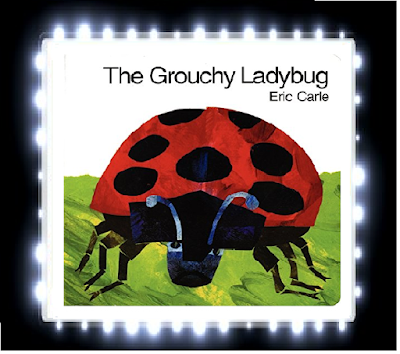 What animal does the grouchy ladybug meet up with the end?

Read the book to find out!

Seriously, this is one creative and hilarious book from the great mind of Eric Carle and both the story and the illustrations contribute greatly to this cautionary tale about bullying.  Eric Carle makes this story extremely as the grouchy ladybug is shown as your average bully as he bullies the other animals into trying to fight with it and I loved the way that the grouchy ladybug encounters one large animal and then moves on to a larger animal than the last and what was so hilarious about this was how the grouchy ladybug always stated whenever it meets an animal larger than itself:

And that statement always makes me laugh because I always wondered about why the ladybug would want to pick a fight with someone who is much bigger than it is.  It was also hilarious that the moment that the ladybug notices the larger animal’s special ability to defend itself, such as the skunk using its stink and the sparrow having a sharp beak, the grouchy ladybug just immediately runs off to find another animal.  Eric Carle’s illustrations are simply beautiful and creative as the images are extremely colorful and keep the story running smoothly.  The images that really stood out the most for me were the images of the grouchy ladybug itself as it always has a grouchy look on its face and looks so small when it flies up against the larger animals.  My most favorite part of this book was whenever the grouchy ladybug meets the larger animals, the pages are sort of cut up to indicate each animal the ladybug passes and the larger the animal is, the longer the pages are.  I also loved the way that there are clocks displayed at the top of the pages of each animal the ladybug meets as it indicates the time that the ladybug shows up to meet up with the animals.

Overall, “The Grouchy Ladybug” is a truly hilarious book that teaches a thing or two about the consequences of being a bully and any child who is a huge fan of Eric Carle’s will definitely get a kick out of this book.  I would recommend this book to children ages four and up since there is nothing inappropriate in this book.