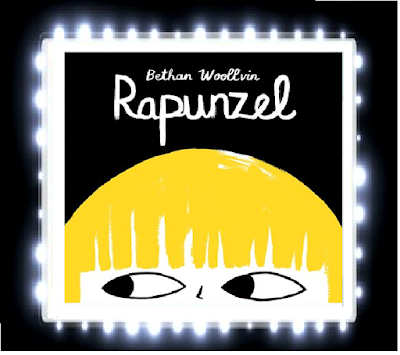 I would like to thank Edelweiss and Peachtree Publishers for providing me a copy of this book in exchange for an honest review.

I had read many fairy tale retellings where the female protagonists (usually, “Rapunzel,” “Cinderella,” “Little Red Riding Hood”) are rewritten as strong protagonists who are able to get themselves out their horrible situations using their wits and action skills.  So, when I stumbled upon this new children’s book on Edelweiss called “Rapunzel” by Bethan Woollvin, which is also about Rapunzel becoming an action girl, I just had to get this book and man was this a truly interesting book!

The story starts off with the wicked witch trapping Rapunzel in a tall and dark tower and every day, the witch would come into the tower and cut some of Rapunzel’s hair off to make some money off of it.  Also, the witch would threaten to put a terrible curse on Rapunzel if she tried to escape the tower.

Was Rapunzel frightened by the Witch’s threats?

I must admit that I was quite intrigued with the premise of this book!  I have always loved reading fairy tale retellings where a different spin is taken on the fairy tale and I will admit that this was not the first time that I had read a “Rapunzel” tale where Rapunzel turns into an action girl (Shannon Hale’s “Rapunzel’s Revenge” anyone)?  Bethan Woollvin has done a great job at retelling this story as I loved the fact that Rapunzel becomes a resourceful girl who used her wits to outsmart the witch in this story and I also loved the fact that she was never scared of the witch’s threats since she is always one step ahead of the witch.  Bethan Woollvin’s artwork is adorable and creative to look at as Rapunzel is shown as being a small girl with long golden hair, while the witch is shown wearing a large black top hat that makes her outfit look so unique! I also loved the fact that the artwork is mostly in black and white with Rapunzel’s hair being one of the few things that has yellow colorings in this book, which makes her hair really stand out in the book!

The reason why I took off half a star from the rating was because I felt that the story was a bit bland at some place. I wished that more was fleshed out on Rapunzel herself and even though I like the fact that Rapunzel is much more resourceful in this book, her actions did not seem to have much weight at times because I wanted to learn more about her backstory to really sympathize with her character.

Overall, “Rapunzel” is a great read for anyone who wants to read a fairy tale retelling that features a strong female protagonist!  I would recommend this book to children ages four and up since the narrative is easily accessible for younger readers.