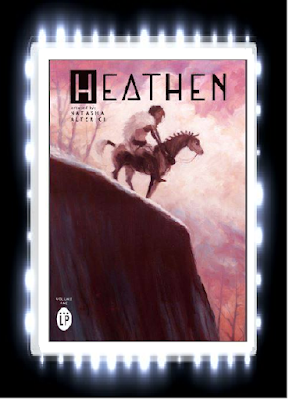 I would like to thank NetGalley and Vault Comics for providing me a copy of this book in exchange for an honest review.

Introduction:
I have noticed lately that I rarely got the chance to read graphic novels that features a LGBT character as the main protagonist and I have been searching for many graphic novels that contains main LGBT protagonists.  Well, luckily NetGalley had decided to hand out such a graphic novel called “Heathen Volume One” which is written by Natasha Alterici along with artwork by Rachel Deering and I must say that this is easily one of the best LGBT graphic novels I have ever read!

The story starts off with a young Viking woman named Avdis who was banished from her homeland due to participating in a forbidden act in her land: kissing another woman.  After this event, Aydis decided to go out on a mission to change the ways of Odin’s empire and the first thing she tries to do is to find and free the Valkyrie Brynhild.  It turns out that Odin had cursed Brynhild by forcing her to return to her mountain prison if she cannot find a mortal who is willing to marry her and Aydis aims to bring Brynhild’s suffering to an end!

Natasha Alterici’s writing: Wow! Natasha Alterici has certainly done a wonderful job at writing this story as she is able to combine Norse Mythology with LGBT themes, which made this graphic novel such a unique read! I loved the way that Natasha Alterici wrote the dialogue between the characters as it really characterizes the characters and I loved the little nods to humor in the dialogue, especially between the two wolves Skull and Hati, which was the best part of the story.  I also enjoyed the details involving Norse Mythology in this story since I am always interested in fairy tales and mythology and it was nice to be able to point out the characters from Norse Mythology that were mentioned in this story, such as Odin and the Valkyries.  But probably the best part about this graphic novel was how it approached the issues that Aydis is going through.  Natasha Alterici has done a fantastic job at paralleling the prejudice that Aydis is going through because she kissed another woman, to the real-world prejudice that the LGBT community is going through and it is great that there is a graphic novel that portrays a strong LGBT character in a positive light.

For anyone who does not like nudity in a graphic novel series, there is a bit of nudity in this volume, especially with the images of Freyja with her breasts being openly exposed.  Also, even though the artwork is gorgeous for the most part, I found the artwork to be a bit too scratchy at times and it was a bit hard for me to see what is going on in the story due to the artwork blurring out some action scenes.

Overall, “Heathen Volume One” is a fantastic graphic novel for anyone who loves Norse Mythology and LGBT characters!