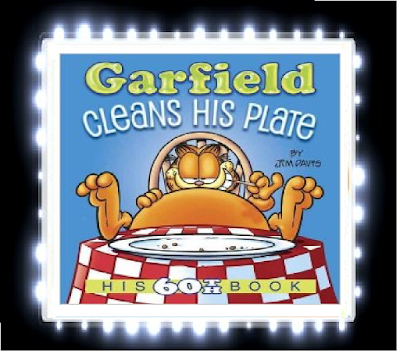 Introduction:
Uh oh!  I had picked up another “Garfield” graphic novel called “Garfield Cleans His Plate.”  I mean, I CANNOT HELP IT!  I just keep picking up a “Garfield” comic because I love Jim Davis’ “Garfield” series so much and this volume is just as good as the previous “Garfield” comics that I had read!

This volume continues the adventures of Garfield, Jon, Odie and Liz and how they spend the Christmas holidays together and how Liz is still trying to get used to Jon’s bizarre way of living like constantly wearing big polka dotted bow ties and dancing in the middle of his lawn while dressed as a daisy in the middle of spring!  Meanwhile, Garfield continues being his snarky self by commenting on various situations that happen to Jon, Odie and Liz in an extremely humorous way!

Jim Davis’ writing: Jim Davis’ writing continues to be witty and hilarious as we see more adventures of Garfield, Jon, Odie and Liz and Garfield continues making sarcastic snide remarks towards the silliness going on with Jon and Odie.  I really loved the way that Jim Davis wrote Jon and Liz’s relationship as we see their relationship progressing at this point as Liz starts to get used to Jon’s eccentric nature and still stands by him no matter how embarrassing his antics can get.  I also love the fact that Garfield still remains sarcastic throughout the series as the characters still have the same personalities despite all the changes happening in the series, with the biggest change being Jon finally getting a girlfriend in Liz. It helps keeps the series consistent with its humor and I can get on board with the changes happening in this series without worrying about my favorite characters becoming different characters towards the end.  I also like the fact that Garfield is supportive of Jon and Liz’s relationship as it shows that he is experiencing a bit of a character development as he went from making Jon’s life miserable (although he still does that from time to time) to actually accepting Jon’s happiness in his relationship with Liz.

Jim Davis’ artwork:  Jim Davis’ artwork is as usual goofy and hilarious to look at as all the characters have exaggerated features such as large rounded eyes and in the case of Garfield, a round pudgy stomach that shows off his massive appetite!  I also loved the way that Jim Davis drew Liz’s eyes as they are large and round like most of the other characters, but the fact that they are almost always half way closed shows how sane she is compared to the other characters.

Overall, “Garfield Cleans His Plate” is another fantastic installment in Jim Davis’ legendary “Garfield” series and I am sure that I will be checking out other “Garfield” works in the near future!