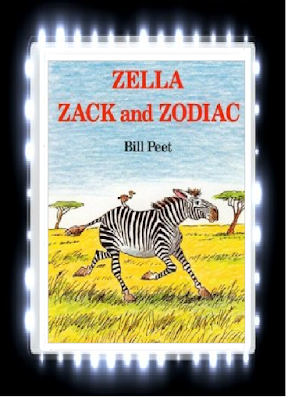 I have read many of Bill Peet’s works in the past, but I had never read a story from Bill Peet that dealt with family issues such as adopting a child and handle the issue with such care.  “Zella, Zack and Zodiac” has proven to be one of Bill Peet’s most heartwarming books that I had ever read!

The story starts off with a baby ostrich chick named Zack who had just hatched out of his egg and it was then that he discovered that his mother had left him when she heard a lion’s roar in the distance and had taken the other chicks with her.  Suddenly at that moment, a zebra herd came zooming by and Zack tried to yell up at them to help him, but none of the zebras took any notice of Zack.  However, one zebra managed to hear Zack and came to his aid.  The zebra was named Zella and she decided to raise Zack as if he was her own child and the two had so many dangerous and heartwarming adventures on the savanna together.  But unfortunately, as Zack the ostrich chick got much older, he started to ignore Zella and Zella started to worry about whether or not Zack remembered how she raised him for all those years and if he still considers her his mother.  Luckily, it turned out that Zack remembered Zella and how she raised him and he ended up greeting her after a few years apart from her.  It turns out that Zella is pregnant and she is expecting a baby soon and she planned to call her child Zodiac.  When Zodiac was finally born, Zella was overjoyed, but then she realized that there was something different about Zodiac…

What is so unique about Zodiac and are Zella and Zack still together?

In all the times that I had read Bill Peet’s books, I never would have thought that I would stumble upon a Bill Peet book that would detail the importance of family while also discussing about adopting a child who is different from you. Bill Peet has done a splendid job at portraying the relationship between Zella the Zebra and Zack the Ostrich as they truly care for each other, despite their different appearances and I loved the way that Zella went to great lengths to protect Zack from any danger in the savanna as it shows how much of a good adopted mother she is towards Zack.  I also loved the fact that Bill Peet made this book much more heartwarming than most of his works as it focuses on a zebra mother’s love for both her adopted child and her real child and it made the book extremely touching to read through.  Bill Peet’s artwork is as beautiful as ever as we get to see the savanna in all its glory and I loved seeing the images of Zack riding on Zella’s back as they run across the savanna as it makes it a truly iconic image for this book!

Overall, “Zella, Zack and Zodiac” is a truly heartwarming book about the importance of family and how two unlikely species managed to become a truly close and effective family.  I would recommend this book to children ages five and up since there is nothing inappropriate in this book, unless the scenes of the various predators going after Zella, Zack and Zodiac might scare some children.