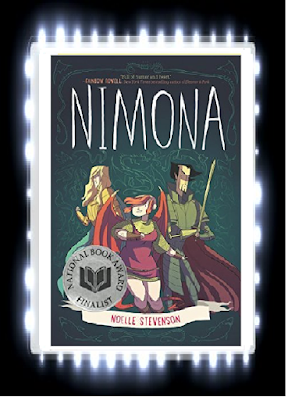 Now, when I heard the rage that was going on with Noelle Stevenson’s graphic novel, “Nimona,” I just knew that I had to check this baby out as soon as possible and oh man, I was not disappointed by the awesome results!

The story starts off with a young girl named Nimona who wanted to become a supervillain and a sidekick to Lord Blackheart, a former knight who started his road to villainy several years ago.  So, after Blackheart decided to take in Nimona as his sidekick, the two friends started causing mayhem in the kingdom, but the reason why they are causing all of this mayhem is because Lord Blackheart wanted to prove to everyone that the Institution of Law Enforcement and Heroics is hiding a terrible secret that could harm the kingdom.  Meanwhile, it turns out that Lord Blackheart has a nemesis in Sir Ambrosius Goldenloin and his rivalry with Sir Goldenloin is personal due to Blackheart and Ambrosius being “very” close friends a long time ago and their friendship had ended bitterly due to Ambrosius cutting off Blackheart’s arm during a jousting tournament and now Sir Goldenloin has it out for Blackheart!

Will Nimona be a good sidekick and will Blackheart repair his relationship with Sir Goldenloin?

Noelle Stevenson’s writing: Wow! I was seriously amazed at Noelle Stevenson’s brilliant writing as the characters are well written and the action sequences beautifully balance out the dramatic scenes!  I loved the way that Noelle Stevenson balanced out the dramatic scenes with the action scenes as we get to see tons of fight scenes between Nimona and Lord Blackheart and the guards of the Institution of Law Enforcement and Heroics and we also get to see some dramatic tensions between Nimona, Lord Blackheart and Sir Ambrosius Goldenloin.  I also loved the way that Noelle Stevenson wrote the mystery segment of this story as the reader has to figure out what Nimona’s true nature is all about and why she is so hesitant about telling Lord Blackheart about it, despite the fact her relationship with Blackheart keeps improving throughout the story.  I loved the way that Noelle Stevenson developed the relationships between the characters, especially between Nimona and Blackheart as they have a father / daughter relationship with each other as Blackheart tries to protect Nimona the best way he can, while Nimona confides in Blackheart with her desires to become a villain.  I was also interested in the relationship between Lord Blackheart and Sir Goldenloin as I was trying to figure out why they seem to care for each other throughout the story and once you realized that they were once friends who ended their friendship rather bitterly, their relationship becomes extremely tragic and I was hoping throughout the story that they would find a way to make up to each other.  For me, Nimona was one of the best characters in the story because I loved her cheerful personality as she constantly tries to get Blackheart to take her out on their schemes, but I also loved her dark and mysterious side as I was trying to figure out what Nimona is really hiding and what is the real truth behind her shapeshifting powers.  Noelle Stevenson has done a brilliant job at creating this unique world where medieval culture combines with modern day technology as you see the characters wear medieval style clothing and have events such as jousting tournaments, but you also see the characters use various technology that are quite modern such as super computers that help the characters contact each other.

Noelle Stevenson’s artwork:  Noelle Stevenson’s artwork is truly cute and dramatic to look at as it is reminiscent of the designs of “Adventure Time” and I loved the images of Nimona transforming into various creatures such as a dragon, a fox and a rhinoceros as it shows how versatile Nimona is with her shapeshifting powers.  I also enjoyed the images of Blackheart having a mechanical arm as it makes him look so awesome, especially when he is fighting his foes and once you learn the tragic backstory regarding his arm, it just makes you feel so much for his character.

For anyone who does not like violence and language, this graphic novel does have some language, which involves the characters using the “d” word quite a bit; although the word is not used a lot.  The violence can also get quite bloody at times, especially with various characters being stabbed and blood being shown on the wounds.

Overall, “Nimona” is a truly unique tale that discusses about true friendship, betrayals, secrets and lies that anyone who is a huge fan of high octane fantasy and action will seriously get a kick out of!